“Is there something in the water?” – The First Team Match Report (Version 1)

What was shaping up to be an intriguing contest between the KPR first team and Lightwater was abandoned after the biblical weather conditions that caused floods across much of the Midlands and the North reached Surrey this Saturday.

Matters overhead were beyond grim but they seemed somewhat fitting for the minutes silence held before kick-off. Once the match was underway it was KPR who enjoyed, according to a ‘Downing Street source’, a “solid” start. Club captain Michael Woods junior in particular was getting a good deal of joy down the right and it was he that created the first genuine chance of the game. Regrettably, Woods excellent cross into the box was squandered by the oncoming Jonathan O’Shea who got the ball caught under his feet.

Such was the KPR dominance this left goalkeeper Kieran Ennis a somewhat marooned figure, but his isolation was not to last long and he did well in thwarting the opposition forward who found himself through on goal. There were more chances at the other end, but Woods put one good chance wide before Liam Harrison tried to win a penalty after a heavy touch.

The referee Andy Webb emphatically waved Harrison’s ‘appeal’ away but he was soon called into action again after a series of late challenges. Most of these emanated from the Lightwater players but one by Ben Wicherek was seized upon by the opposition manager (verbally ‘assisted’ by the linesman) as an excuse to trespass the playing surface to rant and rave at the ref. Having been told to calm down and get back in his box the game resumed in much the same fashion as before.

History demonstrates actions always speak louder than words and KPR’s greater attention to playing football was rewarded with the opening ‘goal’ after Woods did well to arc his run before driving powerfully into the box. It wasn’t to be Woods day however as the ball, having squirmed under the keeper needed to be placed over the line by O’Shea. There were smiles all round among the KPR faithful who were foolhardy enough to brave the weather although this was tempered by some dubious tackling from the opposition number five in particular. 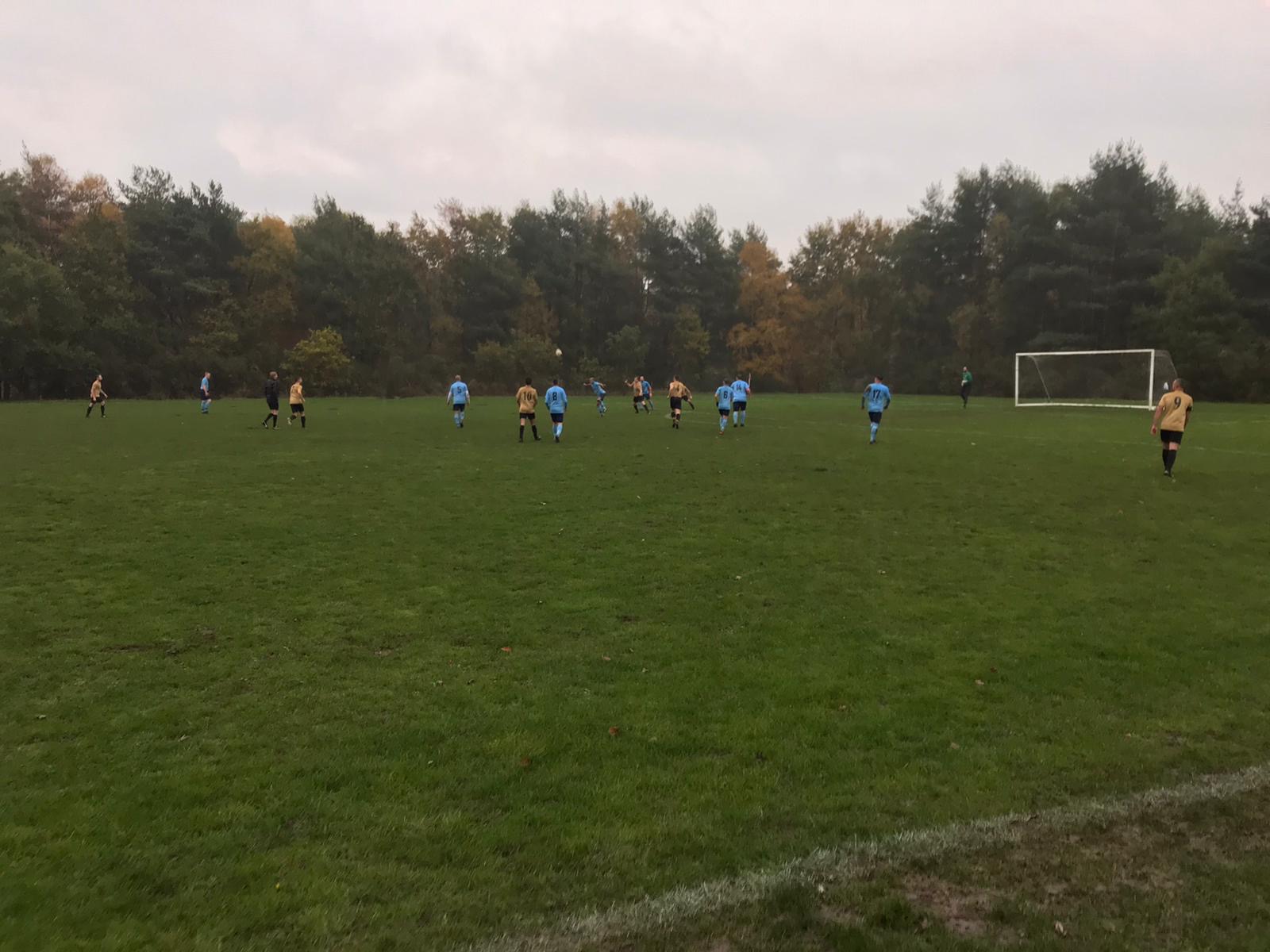 Fortunately, O’Shea saw them coming and he was, matador-like, teasing the fella to everyone’s amusement until a late challenge on Ennis led to a minor outbreak of handbags in the six-yard box. The ensuing pushing and shoving resulted in the perpetrator appearing, from distance, to have his face planted in the mud by Seamus Leonard.

Those that know him would expect no less from ‘Shameless’ but the pressure was definitely on KPR the longer the half went on. The back four were coping reasonably well but Ennis was required to make two more decent saves before the deteriorating conditions underfoot contributed to an equalizer. A soft free kick outside the box ought to have been easily caught but, having called for the ball, Ennis’s standing foot went from under him as he attempted to jump leaving an easy finish, at the second attempt, for the opposition forward.

Half time couldn’t come soon enough for the supporters who took refuge and warm beverages in the leisure centre but the opposition linesman was also heading indoors after referee Webb brandished a red card having received yet more verbal abuse. 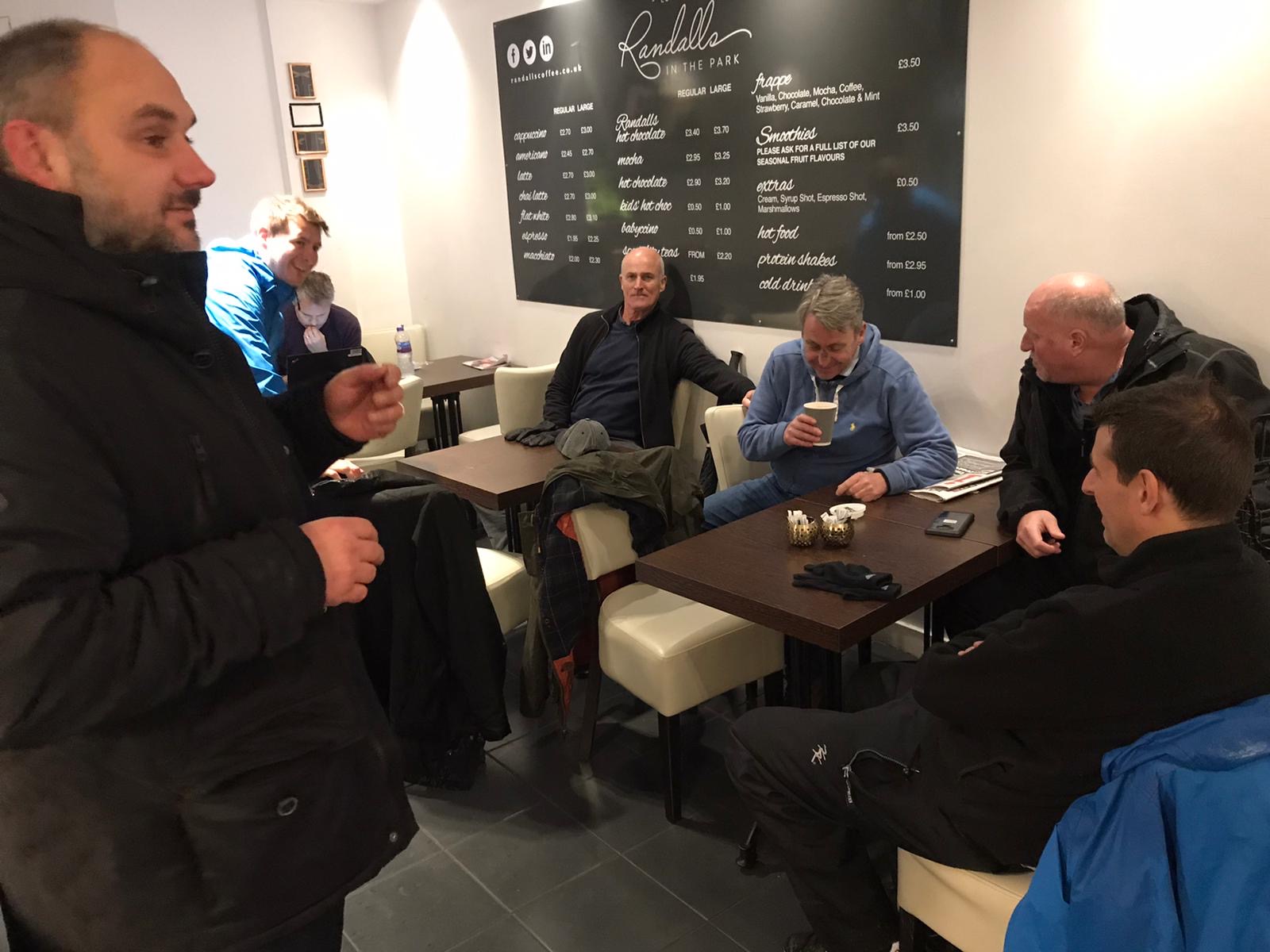 There was also discussion at this point in calling the game off but the game resumed long enough for KPR to take the lead with a ‘well directed’ shot from the edge of the box from Wicherek. There was also time enough for more sliding tackles from both sides but it was one from Chris Bulter that spelt the end of the game.

Opinions were mixed as to the wisdom of this decision and Webb had to appease a few ‘doubting Thomases’ among the frustrated KPR contingent by leading them, like Moses, to inspect the penalty area before receiving more earache from the opposition manager.

It’s a thankless task being a ref at the best of times but the Solomon-like (too many biblical references now?) Webb – if only so the supporters could get some respite from the weather – made the right call. As much as KPR fancied holding on to the lead, both teams will get to do it all again later in the season.