“Every Cloud …” – The KPR Match Report

After a comparatively barren few weeks the KPR first team were back in the goals in a comprehensive defeat of Hambledon at Fortress Pyrford. Indeed, KPR were responsible for all the goals on the day, despite a few ‘big name’ absentees.

The early signs were not great however, as an uncharacteristically defensive opposition essentially ‘parked the bus’ from the very start. This afforded KPR a large proportion of the possession, but – in a performance that resembled an England XI of the early 80s – the ball was mostly going from one side of the pitch to the other with little or no penetration.

Dan Way suffers a nutmeg, but he more than got his own back later

Luke Mitchell may have had the first chance of the match after some strong work from Woodsy down the right, but if Luke’s shot was wayward, the latter gifted the opposition with their first chance after an horrendous pass. The issue averted thanks to a good save from Kieran in goal, neither side was really threatening the scoresheet.

A lack of entertainment (and noise) invoked a few grumbles from the notoriously negative supporters on the touchline. But, as usual, be careful what you wish for as Hambledon went one-up after a brief period of sustained pressure. But as good as the cross / shot was from distance it was a KPR player, Alex O’Shea, who got the final touch. 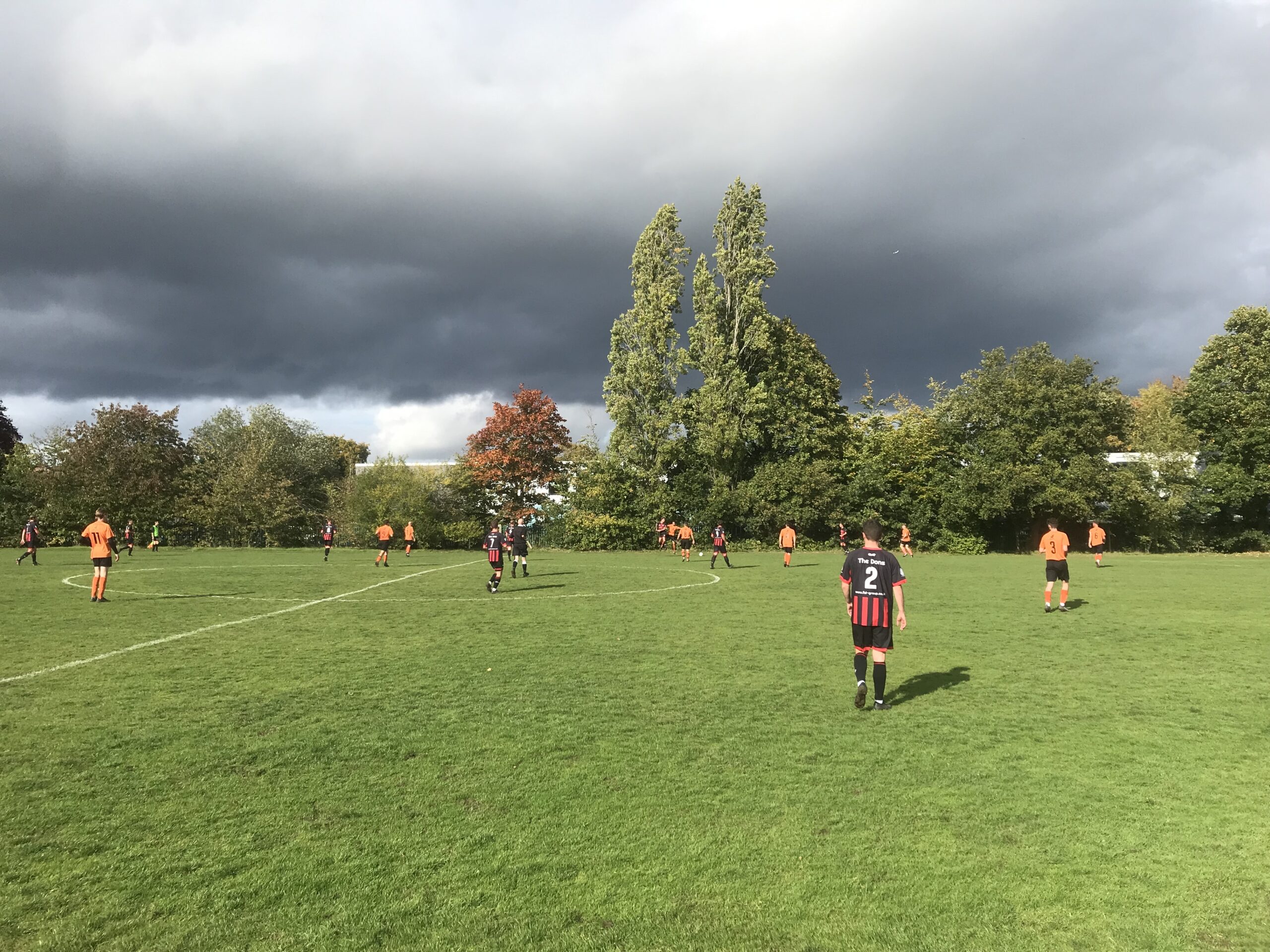 Clouds darken over Fortress Pyrford during the first-half

The atmosphere on the touchline, like the clouds above, darkened further, with bar manager El Boy retired early to the pavilion to put the kettle on. It seemed to do the trick as KPR drew level just before half-time thanks to the ever industrious Doug, who provided Seamus the opportunity to knock a pin point cross to the far post where central defender  Luke Simmonds slotted the ball home.

The half-time teas and beers tasted a little sweeter going in level, but early signs in the second-half were not too promising as the first shot, by Woodsy, went wider than even the corner flag!? Poor as it was, it did signify a greater intent, with KPR exceeding the attempts on goal of the previous half within a few minutes. Of these the best was Luke Mitchell’s sharp turn and shot that crashed off the crossbar, but the supporters did not have to wait long before the increasingly inevitable goal came.

And boy oh boy, what a corker it was as Dan Way struck a beautiful shot with the outside of his left boot from all of twenty-five yards into the far top hand corner. Rightfully the crowd roared their appreciation, but it is a real shame that the club’s lesser spotted camera system wasn’t there to record it. 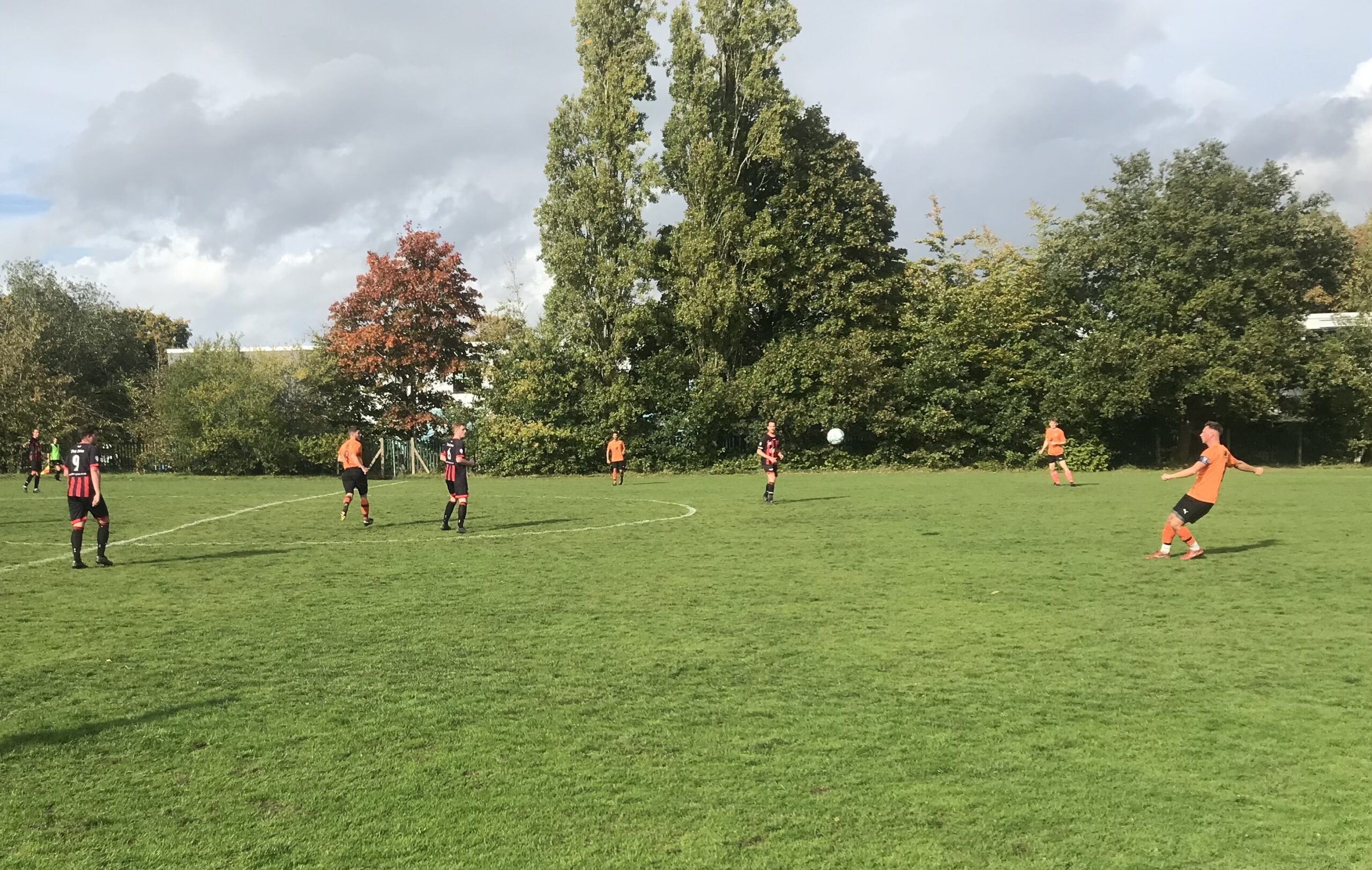 Within minutes there was a third as Mitchell repeated his sharp turn of earlier, but this time slotted the ball low inside the far post. Now, with the game safe, experience – in the form of Nico – gave way to youth – in the form of Max who almost made an immediate impact with a lightening quick run from deep.

That this didn’t come off didn’t matter as Max teed-up Luke at the far post moments later after a lovely flick by Woodsy set him free. KPR were purring now and Luke got his hat-trick with a patient bit of play at the edge of the box before surprising their keeper with a curling shot around the defender.

Now those watching on the touchline didn’t want the game to end. But, like all good things, it did. We’ll just have to look forward to more of the same next week.