If it was clear, from the very start, that Spelthorne were going to pose a considerable problem, they were insufficient to stop the KPR first team winning comfortably.

This comfortable position didn’t come easily however, as Simmo quickly found himself barged into the massed supporters by an opposition midfielder. And as much as KPR retained the bulk of possession the first really clear chance occurred after Kev in goal passed the ball direct to the opposition. 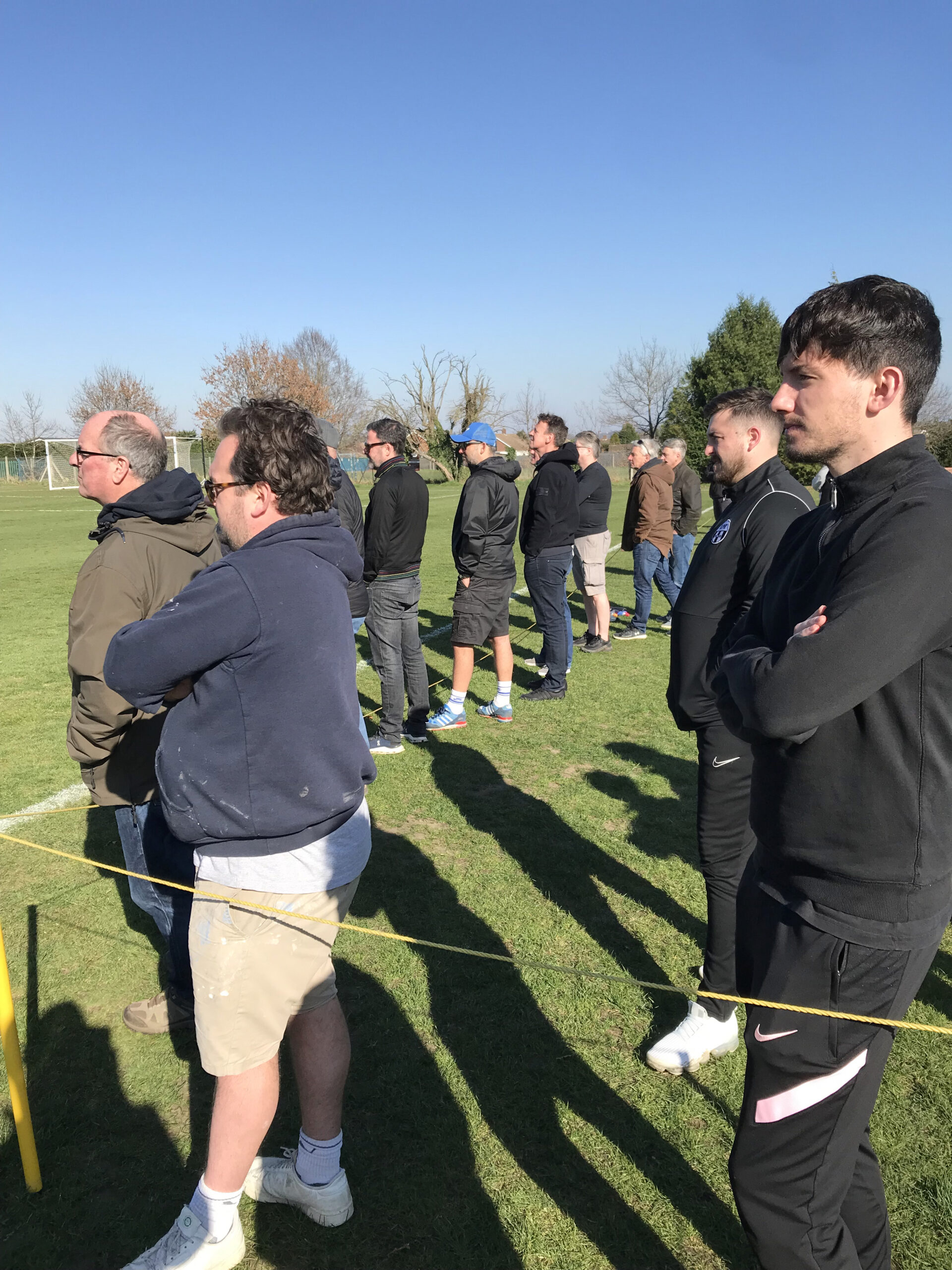 A poor attempt at goal spared Kev any blushes, as the game turned once again following a head injury to an opposition defender. Too groggy to continue, his replacement had little time to settle as Josh Bullen and Luke Mitchell caused all sorts of further discomfort. Indeed, Bullen almost opened the scoring with a sweetly struck effort that hit the crossbar.

If the score was 0-0, the opposition went 2-0 up on injuries as another player was forced to leave the field. This did not put anyone off throwing their weight about, however, and a number of increasingly naughty challenges were only punctuated by a sweet volley from Dan Way that dipped too late to trouble the opposition’s keeper.

Luke in particular was getting a great deal of unwanted attention, but he rode the challenges well. Regrettably, this could not be said for Chris Butler (the daft apeth), and his ill-conceived challenge meant the injury count (body count maybe more apt) rose to 3-1. 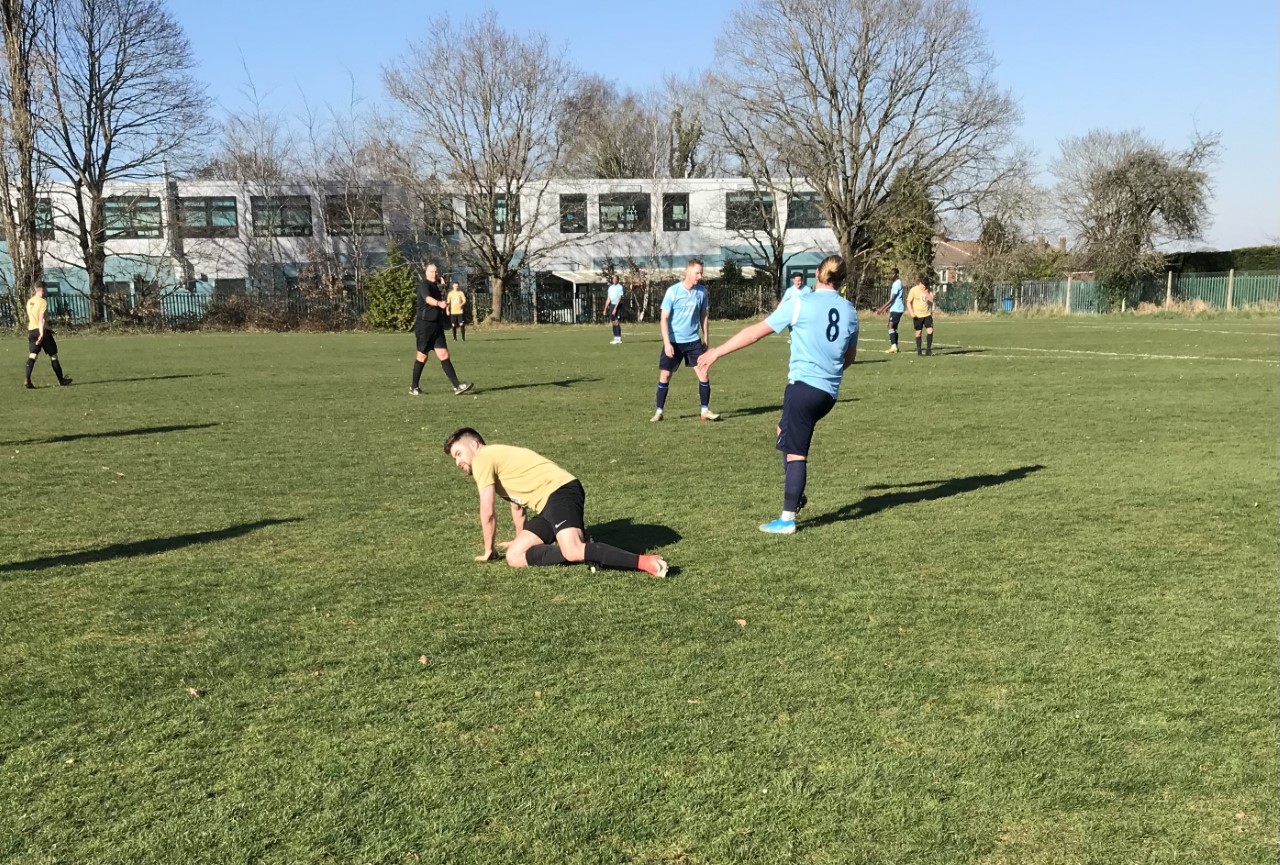 MOM Sam dusting himself off after another hefty challenge

With injury time adding up, the supporters were wondering if the half would ever end, but there was still plenty of time for more incident. With Michael Wicherek on for the stricken Butler, Luke hit another just over the bar before a wicked deflection left the newly shorn Kev helpless to stop the opposition going ahead.

Against the run of play it may have been, but KPR were struggling to create clear cut chances. And, even when they did, the opposition keeper was able to pull off a great save to deny Luke before his efforts to defend from the front resulted in the opposition losing a fourth player to injury.

Going 4-1 ahead would have been a dream to the opposition in different circumstances, but their nightmare of a first half got worse after Woodsy won a free-kick at the edge of the box. Talk on the touchline (from Woods senior in particular) was on Dan Way having a go. And there was consternation when Bullen stepped up … until he placed it in beyond the reach of the keeper.

All square for the beginning of the second-half, the supporters, with the exception of bar manager El Boy, were confident of better things but they did not materialize straight away. Woods did manage a shot on target early on, but the term ‘powder puff’ would be overemphasizing the power behind his effort.

El Boy’s ‘glass half empty’ attitude was almost justified soon after as the midfield began sitting back. In asking for trouble, they almost got it as the opposition exploited the space and a strong following wind with a series of troubling punts into the penalty area. One of these almost sailed in unhindered, but it hit the foot of the post.

Only man-of-the-match Sam O’Shea seemed able to compete for the whole match and more conventional play almost saw the opposition sneak in again with their left winger causing Woodsy (now in defence) all sorts of problems. Luckily Kev was there to intercept the attack with a well-timed challenge that did not only clear the danger, it enabled Michael Wicherek in midfield to play an early ball to Luke up top who finished well beyond the oncoming keeper. 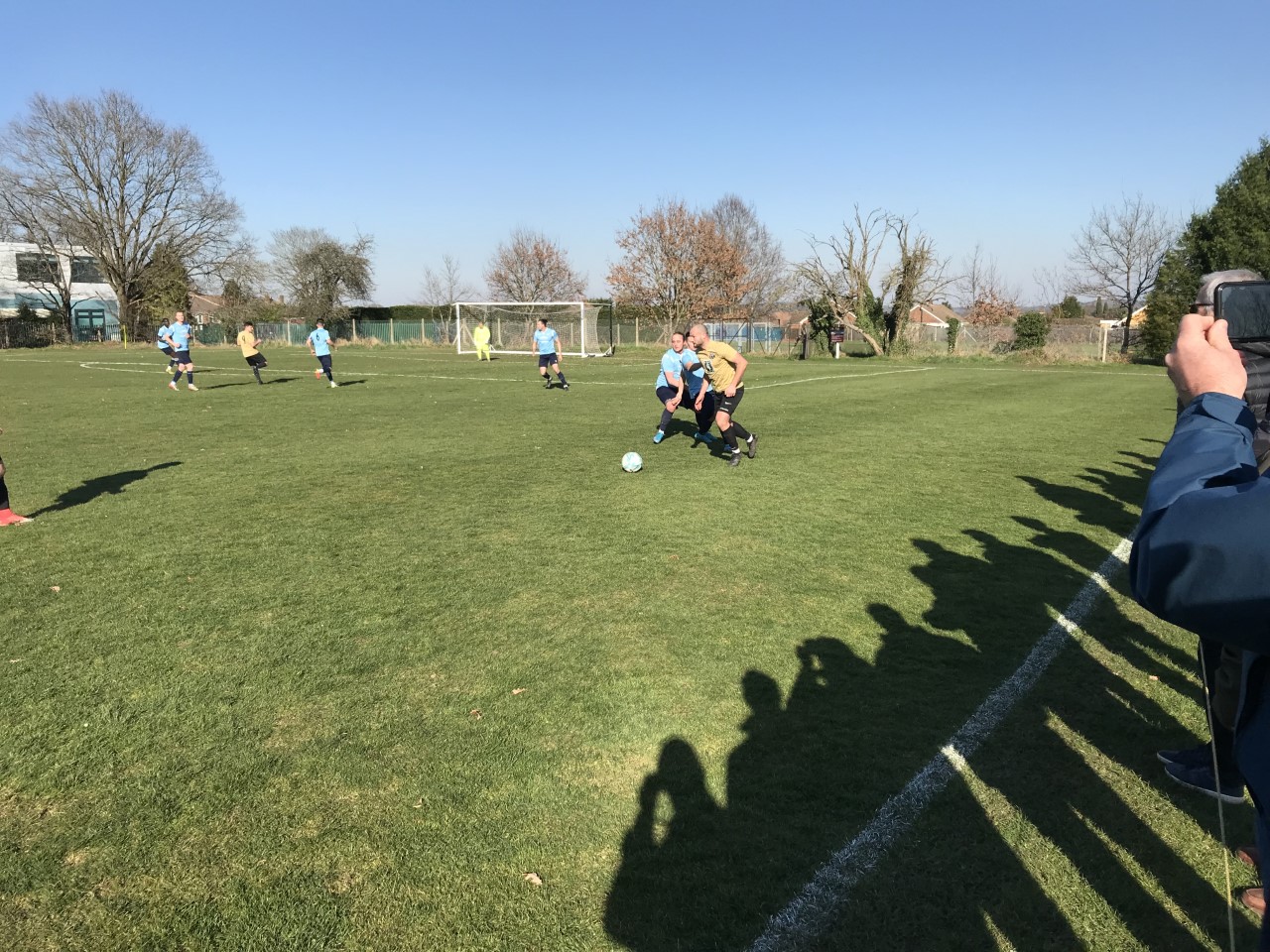 With time advancing, Nico and Vic came on as substitutes and they imposed themselves straight away. Of the two it was Vic who made the most telling contribution with a shot from distance that, having been held up in the wind, floated over the keepers head and into the net.

The game safe, even El Boy could ‘relax’ by engaging in some ‘bantz’ with the opposition before the referee called time to loud cheers, which continued in the bar. It was good to see the Spelthorne lads stick around for a drink also. Both teams certainly played their part.