Football is Back! Well … it eventually showed its face in the second half of what turned out to be a comprehensive win over Cranleigh at a now lush Fortress Pyrford (thank you Crouchy).

While the lockdown, and the KPR Running Challenge, may have paid dividends in terms of the pitch, and George’s waistline, the hiatus appeared to have made the ressies a collection of strangers in what was a very subdued start.

Cranleigh were their usual robust selves, and they were dominating the midfield without really having to throw their weight around. That said, neither keeper was being tested and it must have been at least quarter of an hour before the first recognizable shot on goal. This wasn’t great for the supporters (no ballot required) on what was a deceptively cold day, and Bar Manager El Boy summed up the thoughts of many when he uttered, he’d “rather be picking up leaves in the garden”.

On the field there was silence until a shout for a penalty in the ressies favour was dismissed. This disappointment was closely followed by sighs of relief after a Cranleigh forward placed a free header straight into the ample midriff of the Walrus in goal, but there would, finally, be something to cheer about after the referee awarded a second appeal for a penalty to the ressies. 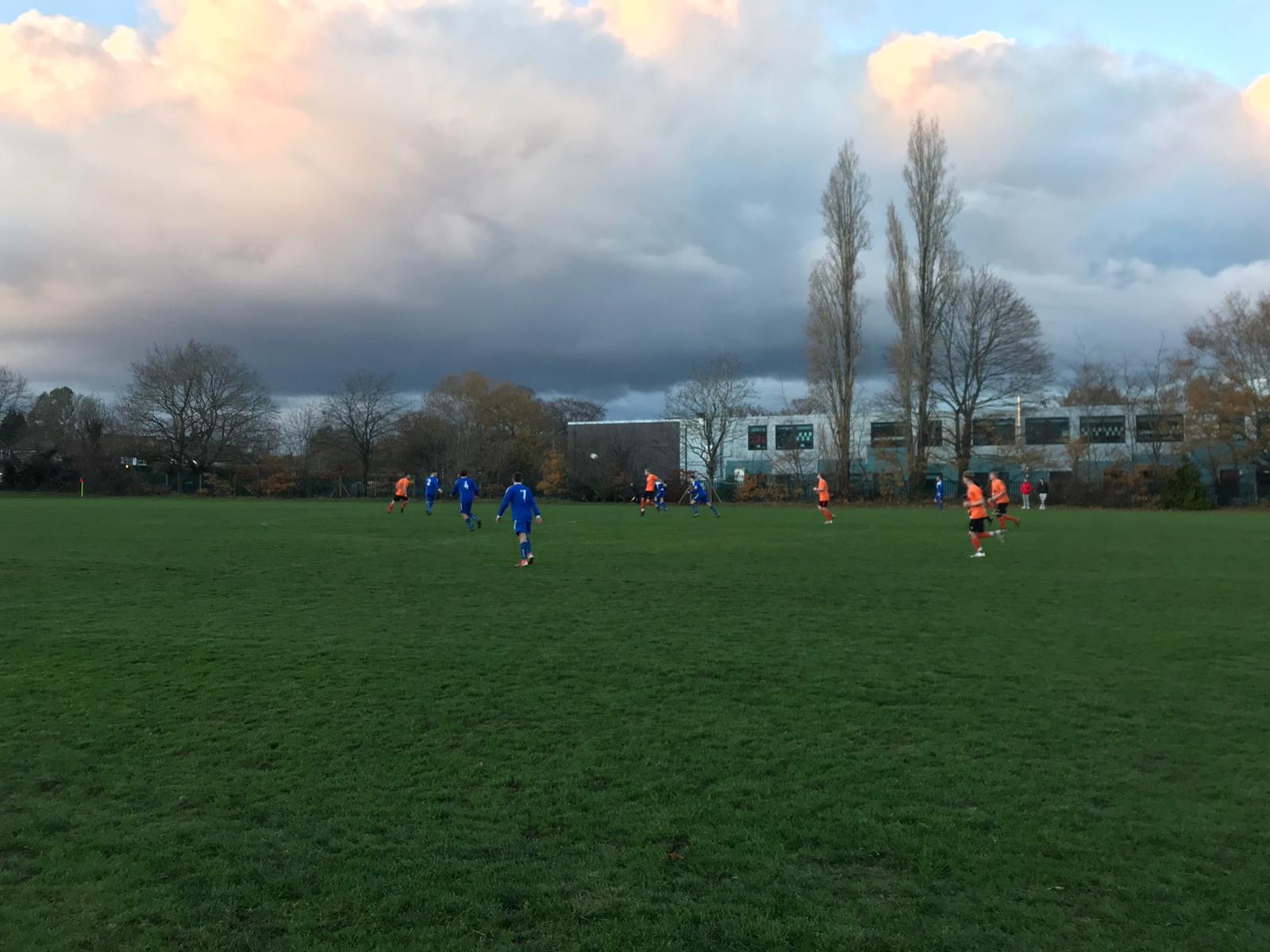 Nicely put away by Jack Lacey, going behind brought out a bit of opposition ‘gamesmanship’, and the game got increasingly fractious either side of half-time. Indeed, while the game continued in the same fashion, the only change, at this early stage of the second half, was the replacement of a limping Kempy for Oli up top.

Oli wasted no time in making a crucial contribution by chasing down a back pass to the opposition keeper who thought he was being clever by giving Oli ‘the eyes’ and passing the ball ‘blind’ across his own box to his centre back. Instead, he overhit the pass and allowed the oncoming Midgers to gleefully place the ball into an empty net as the keeper made a futile attempt to save.

If that was a tad lucky, the third goal was a beauty. Again, Oli got things going by setting Midgers off on a powerful run down the right wing and into the box. Having got there many expected the shot but he rolled the ball across the box for Dan Trowse to also finish into an empty net.

Despite a good defensive performance overall, it was at this point the ressies switched off a bit and they conceded a very soft goal. And yet, the game was soon made safe after another misplaced pass from the opposition keeper found man-of-the-match Fred on the left wing and his first-time chip back over the keeper’s head from a good twenty yards fully deserved the round of applause it received.

While no one was clapping the referee, after an eye-wateringly obvious foul on Dan in the box was waved away, the Walrus gained plaudits for a superb reflex save, from close range, low to his right. In the end it was called back for offside, but it was clear who was having the better day between the sticks.

Or was it?? Because the Walrus then conceded a penalty and got himself booked for ‘back chat’ having claimed to have got to the ball first.  At 4-1 it may not have put the final result in too much doubt, but the ressies need not have worried as the Cranleigh captain blasted the ball onto the crossbar.

If a few members of the opposition were feeling low, many of the supporters had lost all sense of feeling in their feet. Nevertheless, they were enjoying what was a very good second half and Oli then capped-off a good substitute performance with an assist for Midgers who claimed his second tap-in of the match, before the full-time whistle blew. Assuming the season continues, let’s hope for more of the football we saw in the second half.