It was goals, goals, goals in the sunshine as the ressies prevailed over a very decent Knaphill team to consolidate their position at the top of the table. From here on in its all about the results but, it must be said, this was not always the delightful performance a five-three scoreline might suggest.

Given there was a fitness cloud over the Walrus in goal, the afternoon was already a little fraught. But it was bar manager El Boy (a creature of habit) who hit the panic buttons after Tigger’s late arrival with the tea and cookies.

Luckily the ressies have got into the habit of winning this year, and they began the game as brightly as the sunshine in the opening moments. However, the match did not really come to life until Westie charged down an attempted clearance and he then had the first authentic attempt on goal from distance.

Westie had certainly had his Weetabix © this week and his work rate fully warranted his joint man-of-the-match award. It being the first game after the Christmas, it was clear many of the players had also been eating with George Searle, in particular, an even bigger presence in midfield than usual. 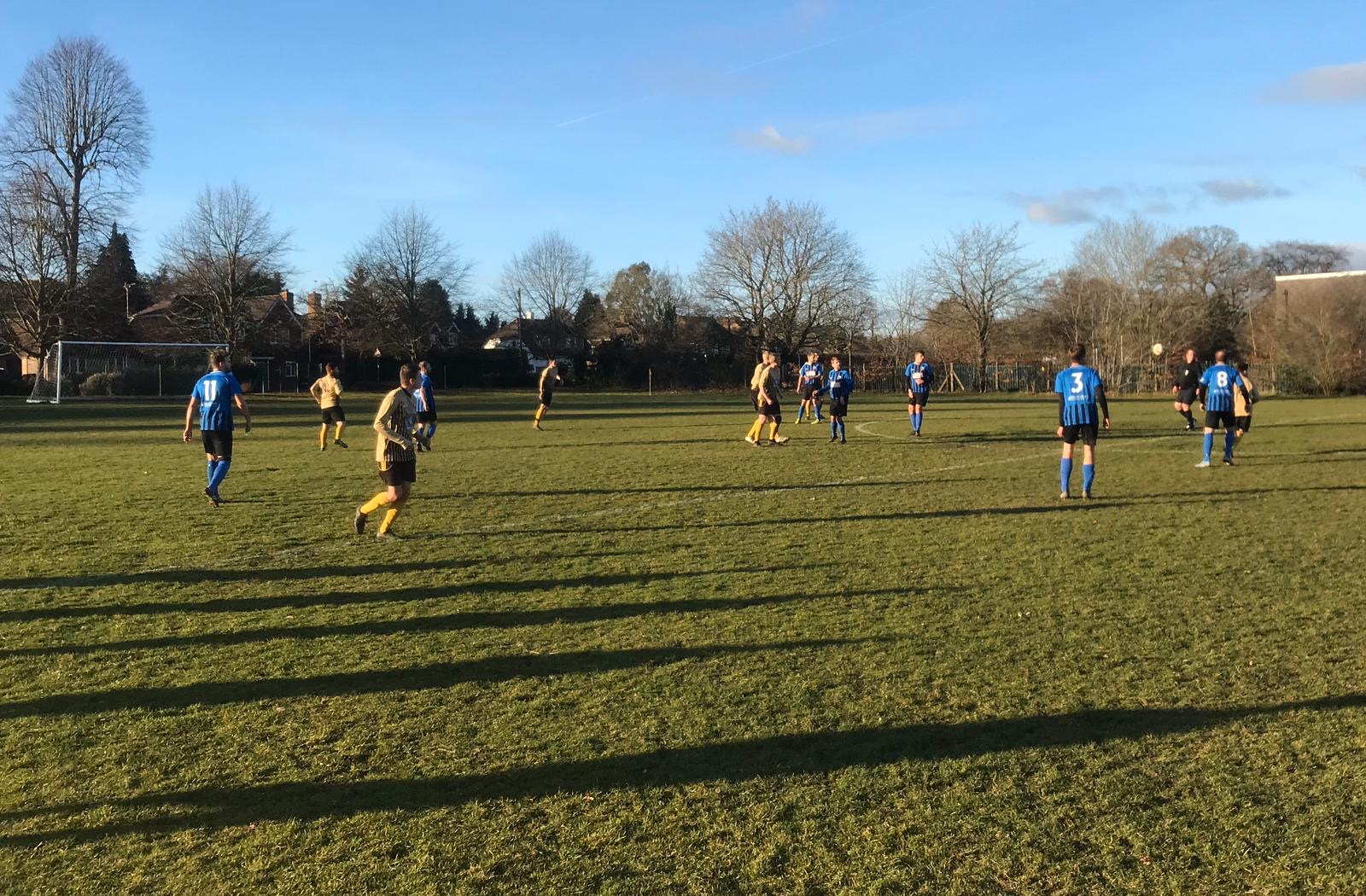 We are used to George breaking up the opposition play but he demonstrated, in what was his first game for a month, there is more in his locker than mince pies with a sublime pass that led to the opening goal for Steven Kemp. If Marmite made footballers, they’d call them Kempy and he looked to have squandered the chance to score after a defensive intervention. Kempy had managed to retain possession and while it looked like he was going to square the ball, he struck the ball sweetly, with a minimum of back lift, to beat the keeper at the near post. 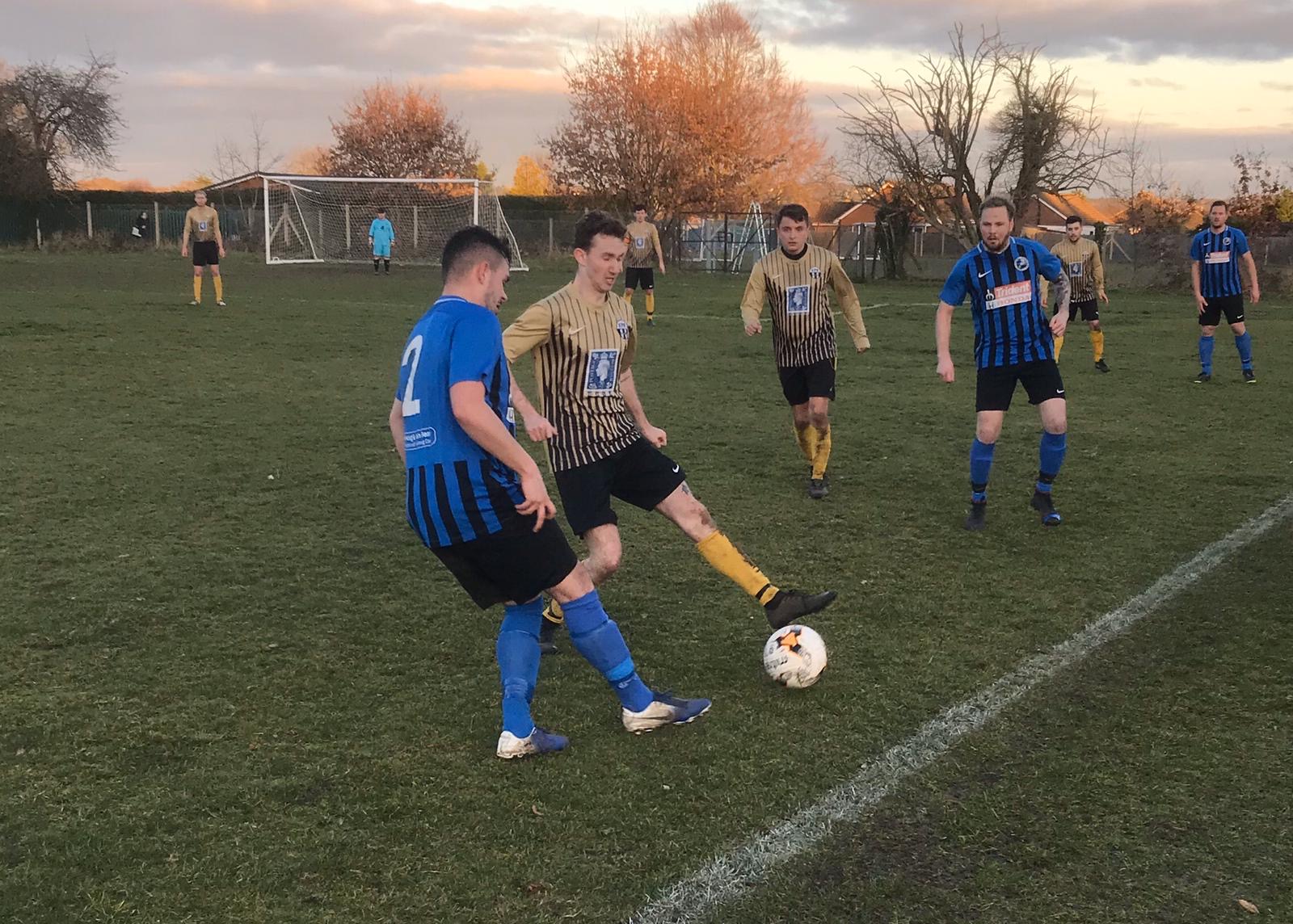 It was little more than the ressies deserved at this point and there was much good interplay between the forwards and the midfield. Alex O’Shea was very much the lynchpin, but James Kear was also seeing a good deal of the ball and he could have scored at least two on the day. That said, the second goal came from more direct play as a free kick out of defence was flicked on by Westie for Vic Hamilton to score with the outside of his right foot.

It was a great finish but the opposition then scored an excellent goal of their own after a rather soft free kick. Injured or not there was nothing the Walrus could do as the Knaphill midfielder stroked an unsavable shot into the top corner of the goal from all of 25 yards.

Knaphill have some decent players but there is also a degree of mischief in their play.  The referee may have fallen for their shenanigans in our last meeting but this week’s referee had an excellent game. That said, the crowd were somewhat perplexed – the suspended Ryan Wallis was ‘incredulous’ in his Crystal Palace issue overcoat – that he didn’t brandish a yellow card after one of the opposition, having dived, moaned loudly at the referee before throwing the ball away. 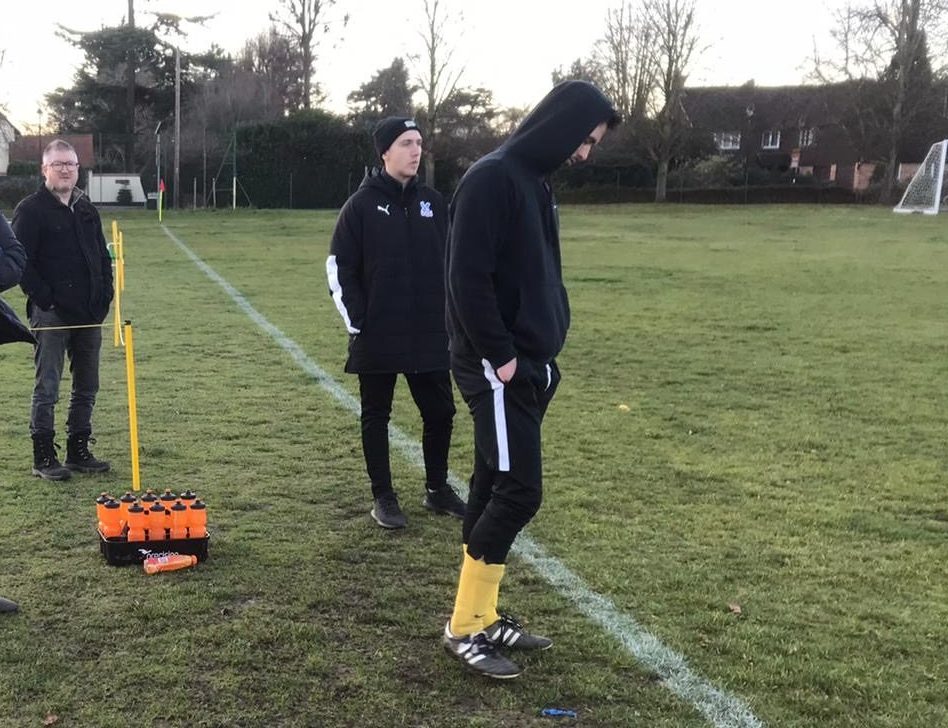 There then came what would have been an unbelievable goal after some brilliant play from Westie and Vic teed up Kearo but he put the ball over the bar as the defender charged out to meet him. It may well have put the game to bed, but it was very much game on again moments later when Knaphill scored an equalizer.

The ressies then had the ball back in the net but Westie, who deserved a goal, was offside after the keeper had parried a shot from Kearo. All-square at half-time wasn’t great given the quality of the play going forward and this trend continued at the beginning of the second with Kempy testing the keeper from distance in the opening moments.

Regrettably, the ressies were unable to maintain this dominance and there was a period, that seemed to go on forever, where the defence were put under a good deal of pressure, and even Captain Marvel, the normally reliable Callum Toone, lost the ability to clear the ball.

Mercifully the Knaphill defence threw the ressies a lifeline with a bizarre bit of ‘defending’ that saw Kempy thrown to the ground right in front of the referee. The resulting penalty was hardly deserved at that stage, but Vic tucked it away with aplomb. Typically, there was little time to enjoy the lead, as the scores were soon level again following a defence splitting ball that left the Walrus stranded.

The bench were pulling their hair out at this stage and mixed things up by swapping George for co-manager James Nixon. This was Nico’s first run-out in almost three months and he’d not had much of a chance to impose himself before the ressies took the lead once again after the opposition failed to clear a re-taken free kick.

There were claims that Kempy’s goal was a ‘bicycle kick’. If that bike were a penny farthing perhaps but there was no denying the speed of his reaction that allowed him to hook the ball back over his and the keeper’s head into the goal off the far post. The celebration was enthusiastic to say the least but Kemp was brought down to earth soon after following a horrendous free kick that led to howls of laughter.

The supporters could afford to laugh at this stage. As disjointed as the performance was there was never any danger the ressies would lose and this feeling was justified after an inexplicable handball led to another penalty. There was a long delay as one of the opposition was sin-binned but co-man-of-the-match Vic overcame the pressure to score his third calmly.

With more than fifteen minutes to go there was still plenty of time for more action and there could have been another penalty after Westie was forced to evade a nasty looking challenge that had little to do with the ball. Credit to Knaphill though as they continued, despite being a man down, to look threatening. The ressies helped by not managing the game well and they were conceding too much possession to the opposition who hit the post twice in quick succession before the referee finally called time.

It may have been, in El Boy’s words, “a strange game to watch” but who cares about aesthetics eh? You can’t question the result or the commitment of the players. Whisper it, but their destiny is in their own hands.