Bookings: Too many than were warranted

The much-anticipated clash between the Keens Park Rangers ressies and Hambledon reserves lived up to expectations in what was a very entertaining victory for the ressies.

With matches off almost everywhere else the pitch at fortress Pyrford was in remarkable condition – lush even? – but neither side, despite an influx of redundant first teamers, could produce the quality they were clearly capable of in the opening minutes. 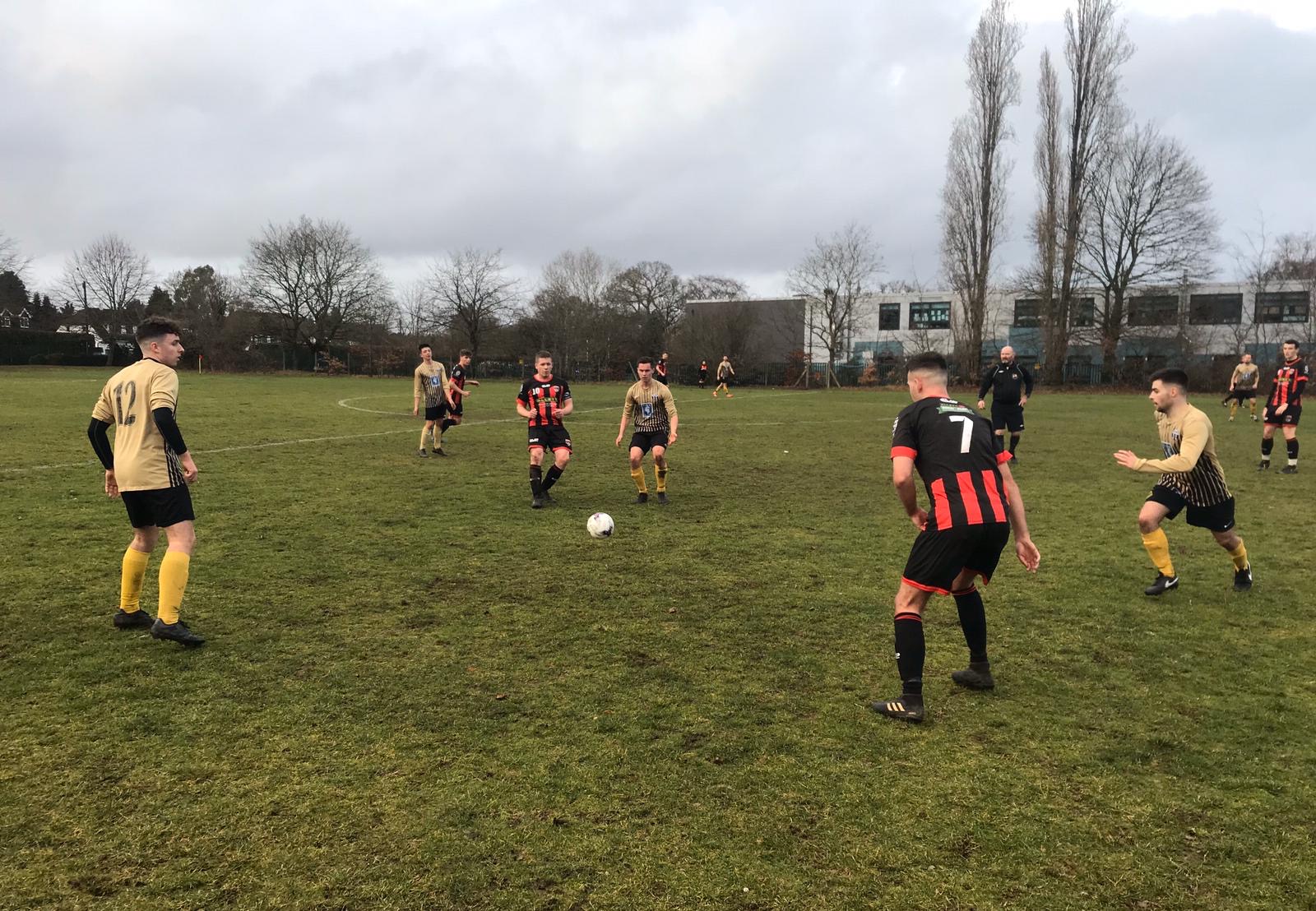 Alex about to pounce

A smattering of hangovers was clearly having an effect but, that said, it was the ressies who were attempting the more intricate play while the Hambledon players opted for a more direct route to goal. The first chance fell to the ressies after the ball broke free at the edge of the box. Ben Wicherek’s struck the ball sweetly but his effort went straight into the grateful keeper’s midriff.

The first bit of real quality then emerged from Alex O’Shea who nicked the ball before setting Vic Hamilton free down the left. Vic then squared the ball to Johnny O’Shea but his first-time effort shaved the outside of the post. Johnny had another chance soon after, and his third effort produced a really excellent save from the opposition keeper that Peter Schmeichel would have been pleased with. 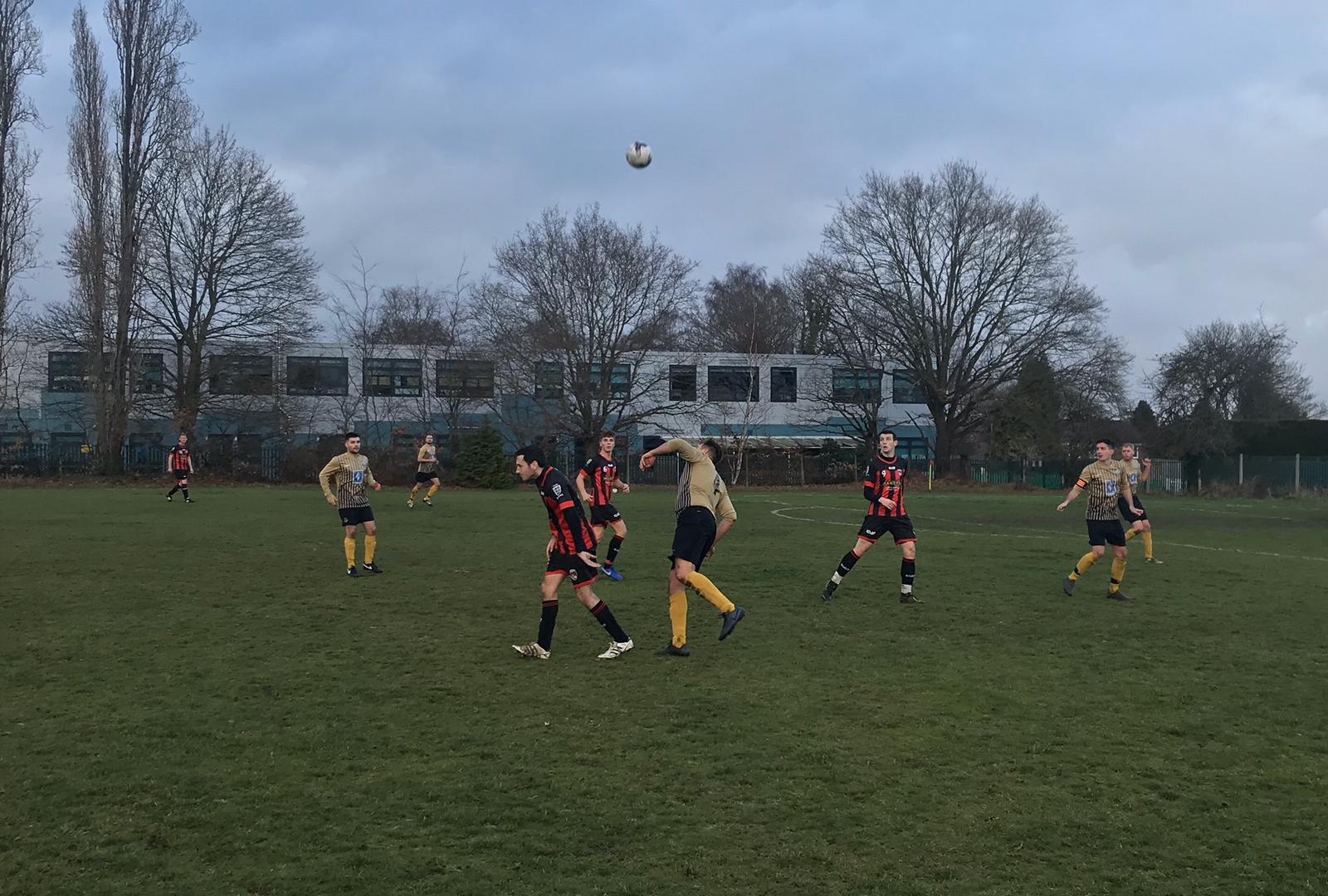 As good as the save was the Hambledon defence were unable to clear the ball and it was only seconds later that Johnny was upended for a clear penalty. As much as the defender in question was throwing his arms about in protest it was one of the referee’s easiest decisions of the afternoon and Vic calmly stepped up to slot the ball home for a deserved lead.

Hambledon did have a secret weapon in those defenders arms however and his unfeasibly long throws into the box at pace would arguably surpass our own long throw specialist Easty. A series of these were causing the massed KPR spectators some concern, and they were justified when the ressies, having failed to deal with one well-directed effort, were grateful to James Crouch who cleared a goal bound effort off the line.

The chances kept coming for Hambledon at this point and Jake ‘the walrus’ Simms was demonstrating some animalistic reflexes in goal. Incredibly assured handling aside it was a series of what granddad-to-be Woods Senior called his “backhand reverse double flick” that proved most pleasing until a “superman” punch clear and, then, another reflex save from another long throw topped them.

Despite all this pressure the opposition were beginning to show some frustration and a small number of them – ironically, those more heavily built – were beginning to go to ground rather easily. The referee appeared to get suckered in by some of these antics, and the opposition No. 4 in particular whined a good deal if his appeals were not upheld. The game was played in a good competitive spirit however and there was an excellent moment when another soft free kick engendered exaggerated uproar from the KPR tifosi, which then had the referee and many of the opposition laughing. 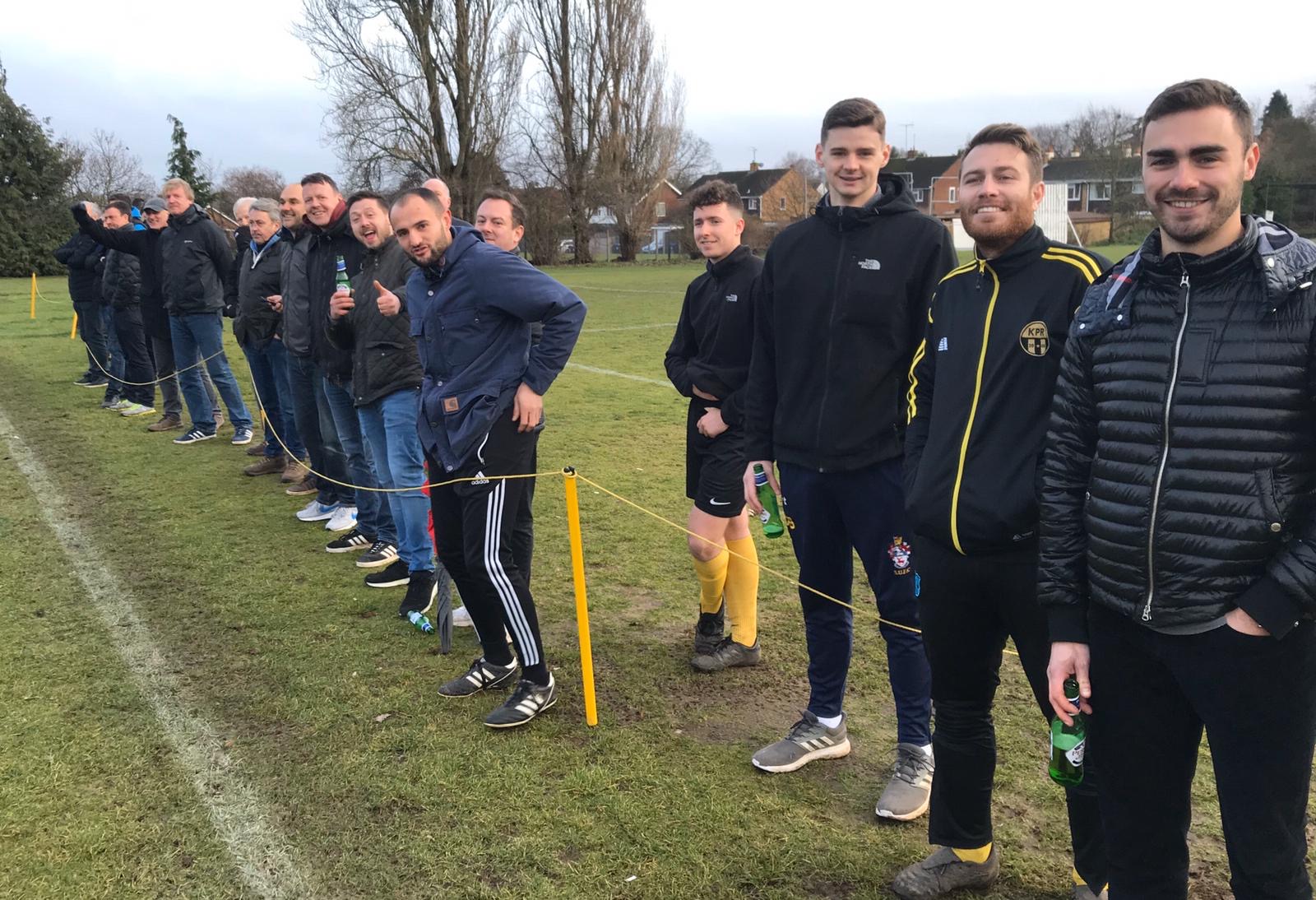 Going in ahead at half time was the least the ressies deserved. The work ethic was superb from back to front, but this needed to be maintained, if not exceeded, in the second half if the ressies were to prevail.

Managers Mungo and Nixon swapped Jamie Hunt for Dan Way at the break but it was the opposition who began the half more energetically. Such was their industry the ressies were grateful to the walrus for keeping things level with another brilliant reflex save that he tipped over the bar. There then followed an incredibly soft booking – the first of many – for Partridge who hadn’t warranted any disciplinary attention up to that point.

Substitute Way was looking to weave his magic on the left but a period of conceding cheap possession gave the opposition some unwarranted encouragement. Seamus rightly pointed out “we’re causing our own problems” but, despite this, the ressies still looked the more likely scorers. Indeed, they had a good claim for another penalty after a well struck effort from outside the box appeared to be ‘saved’ by the defender. Johnny then had another chance with his head after a decent cross from Ryan ‘Midgers’ Midgley, whose fan club membership is now up to three (membership card – No. 2 – is in the post El Boy).

If the defender’s save was a questionable call for a penalty the pulling back of Vic by the last man was, to the entirely objective KPR supporters at least, a definitive red card. Inexplicably the referee wielded a charitable yellow (‘tis the season I guess). The following free kick went just wide and there were two further chances before the management gave Midgers a rest to bring on everyone’s favourite clown footballer Steven ‘Co Co’ Kemp. 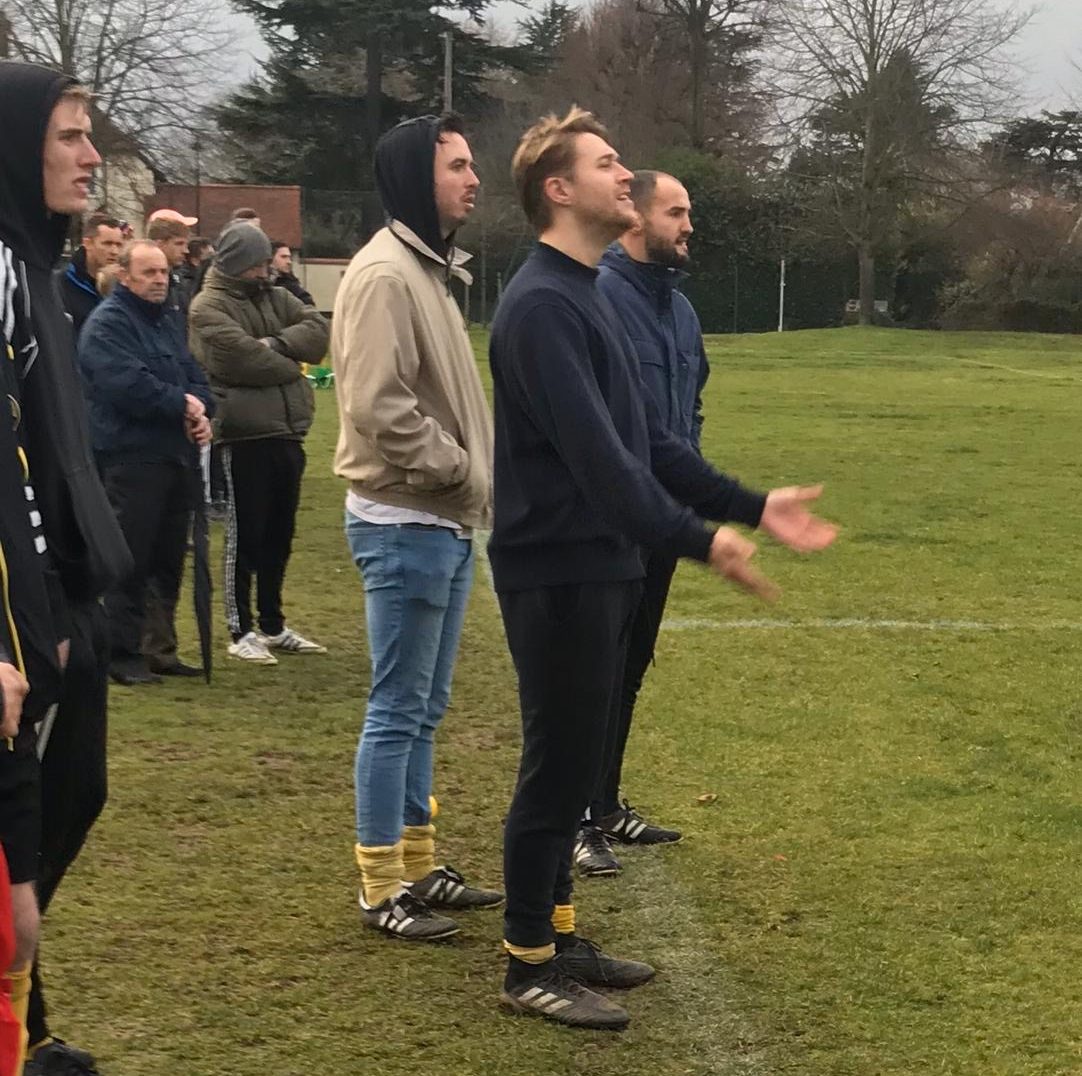 Kempy didn’t let us down either with some comical play and a booking, within minutes, for a ridiculous challenge after he appeared to mistake the opposition midfielder for a bouncy castle. One can only assume the referee loves paperwork as a series of ‘early Christmas cards’ were distributed to both sides without the game ever getting remotely ‘spiteful’.

One challenge on Tom ‘TC’ Collins may have got the crowd a little agitated but it was, in old money, nothing more than robust. Luckily TC emerged unscathed but, having made yet another crucial save, the excellent walrus was forced to depart the scene after pulling something in his leg. 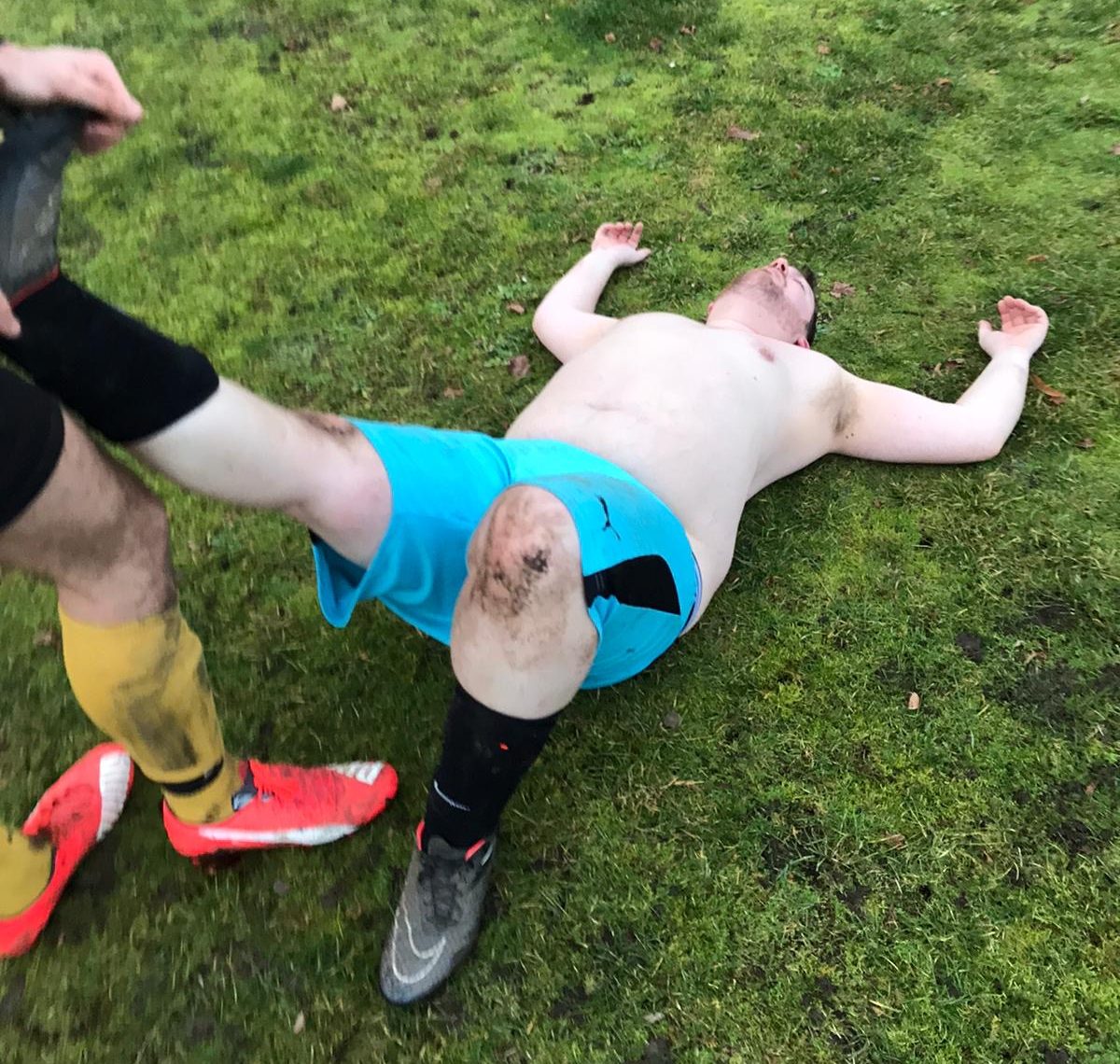 This was bad news of course. But it was especially so for final substitute Elliot Westwood, who now had to go in goal with just under ten minutes left. Fortunately for Westie he had captain Calum Toone in front of him who fully deserved his man-of-the-match beer from bar manager Chainey who gushingly stated he “never put a foot or a head wrong” all afternoon.

It also helped that much of the play remained at the other end of the pitch. Alex had another good effort blocked but, as nerves were heightened the nearer a crucial victory got (Mungo was even more animated than last week), it was clear that composure was needed to see the game out.

Luckily this was exactly what the opposition’s forwards lacked and two good chances in the dying minutes were squandered before the final whistle brought forth a great ovation. Mungo stormed onto the pitch in glee and there were hugs all round before some sweeter than normal beers were consumed long into the night.

‘Over the moon’ Brian!

Given the healthy position (if not our livers), the club as a whole can enjoy the short Christmas break to the full but, with only half the job done, everyone will need to be on their mettle come the new year. More performances like this and some silverware looks a distinct possibility. So easy on the mice pies and booze lads!