Man of the match: Vic Hamilton

The ressies may have been made to work hard in difficult conditions to overcome a robust Knaphill team, but their victory, which places them at the top of the table, was well deserved.

It was a minor case of déjà vu however at the start as both teams appeared ‘rusty’ and each struggled to get anything resembling football going. As the pitch clearly did not help in this regard James Crouch stumbled upon the idea of simply keeping the ball in the air and a cross into the box turned into a shot that rattled the crossbar like a Jack Grealish penalty (hello Chris) from all of thirty yards.

That helped a bit to warm the supporters who were braving some very chilly conditions and the ressies came close again when Ryan Wallis fluffed a half chance. 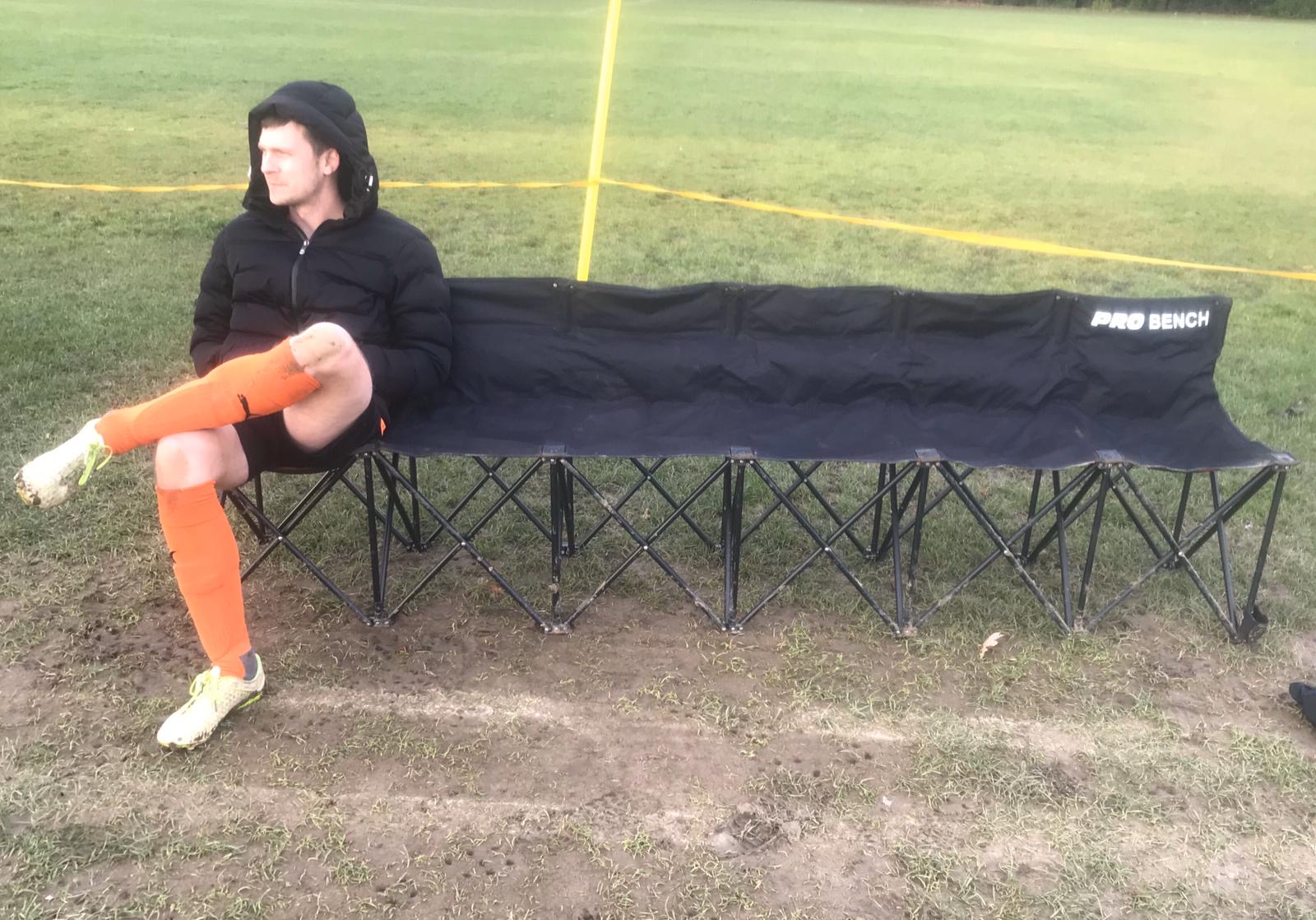 At the back things were looking nice and solid but the opposition did have their chances thanks to some good play in their midfield. Luckily the opposition had left their shooting boots at home. Jake Simms in goal was especially grateful as he came for one through ball that he was never going to reach. Having realized this halfway into the process he performed what can only be described as a ‘dance’ sufficiently daft to distract the forward who then put the ball wide.

Further déjà vu ensued as the dog poo interruptions of our last visit repeated themselves. Without ex-manager O’Shea’s poo bags on hand the reluctant volunteer had to use some bog roll and a small portion of the pitch was left resembling a match from the 1970s. Mercifully, more entertaining movements were on view at the resumption of play and the ressies scored the opening goal thanks to Vic Hamilton. Having just returned from a backpacking adventure in Australia, Vic, like much of Australia, was on fire and he finished at full stretch with the outside of his foot having outstripped the defender for pace.

The ressies were then forced into an unscheduled change after fellow forward Elliot Westwood suffered a head injury. Mercifully the air ambulance wasn’t required this time and there was a more than able replacement waiting on the bench in Jamie Hunt who made an immediate impact with what was almost his very first touch.

The supporters had the best view in the house as Hunt latched onto the ball at the edge of the box and curled the ball superbly into the far corner in off the post. Two-nil was a fair reflection at this point and it ought to have got even better for the ressies soon after had young Vic played his role up front properly and decided to pass when he only had the keeper to beat.

Vic had another chance but signs the Knaphill players were becoming frustrated emerged after captain Callum Toone was on the receiving end of a late challenge in his own box. The referee was not especially helpful at this or other points of the game having decided ‘words’, rather than the ‘sticks and stones’, more important. Certain players were not helping him of course and a fracas ensued at the half time whistle that saw Billy Neal and an opposition player booked.

The distraction interfered with managers Mungo and Nixon’s pep talk but the ressies still looked the better side at the resumption of play. Midgers had an excellent chance but his well-struck shot was superbly saved by the keeper. Not to be outdone the Walrus produced one of his own moments later but the referee’s sensitivity to language then led to the ressies going down to ten men after Adam East was sin binned for questioning what was a soft decision for obstruction.

There then followed an even softer booking for Vic for a challenge that hardly warranted the name, let alone a foul. Given this, it was rather bizarre that the referee then failed to give two penalties to the ressies. The first may well have been fortunate but there was no doubt about the second after Vic had been upended in the box after a clever turn.

Mungo and Nixon were going nuts on the touchline and they were kicking and heading every ball and they subbed East for Jack Lacey after his ten minutes in the bin were up. Lacey who did his best not to get too muddy but he and Neal, now at right back, did well. Up top the chances kept coming and the best of these fell to Hunt but he could not reproduce the earlier finish having hit the ball straight at the keeper.

The miss, like last week, almost came back to haunt the ressies as Knaphill scored a good goal of their own that the walrus could do little about. This did not help the managers’ blood pressure but despite a minor onslaught the defence held firm with Rob Partridge looking strong once again.

Strength was something that appeared to desert one of the opposition midfielders who collapsed under his own weight while being challenged by Wallis. It was a very soft foul to say the least but Wallis then prodded the ball into the prone midfielder. Wallis’ petulance had eyes rolling on the touchline but they were popping out as the referee brandished a red rather than the deserved yellow everyone expected.

Nixon rightly had sympathy with Wallis but he was justified in pointing out the incident was entirely avoidable. Down to ten for the second time in the match the ressies held out relatively comfortably for the remaining few minutes. A big cheer went up at the final whistle but it also led to another round of handbags.

The best team won what was a decent physical test if nothing else and the ressies deserve their spot at the top of the table. Next week will be another matter however as first plays second in a six-pointer that has the potential to end the league’s only remaining unbeaten records. Definitely one to look forward too. Get yourselves down to fortress Pyrford!