This had to be the week that KPR got back on track, Gary needed it to be so that his interview with the Woking News and Mail wouldn’t result in him suggesting that we would be a mid-table team this year.

The Pyrford pitch had been treated to plenty of rain during the week and consequently looked and played excellently. The Golds got off to a good start with control of the game, utilising the pitch and keeping the ball at feet. 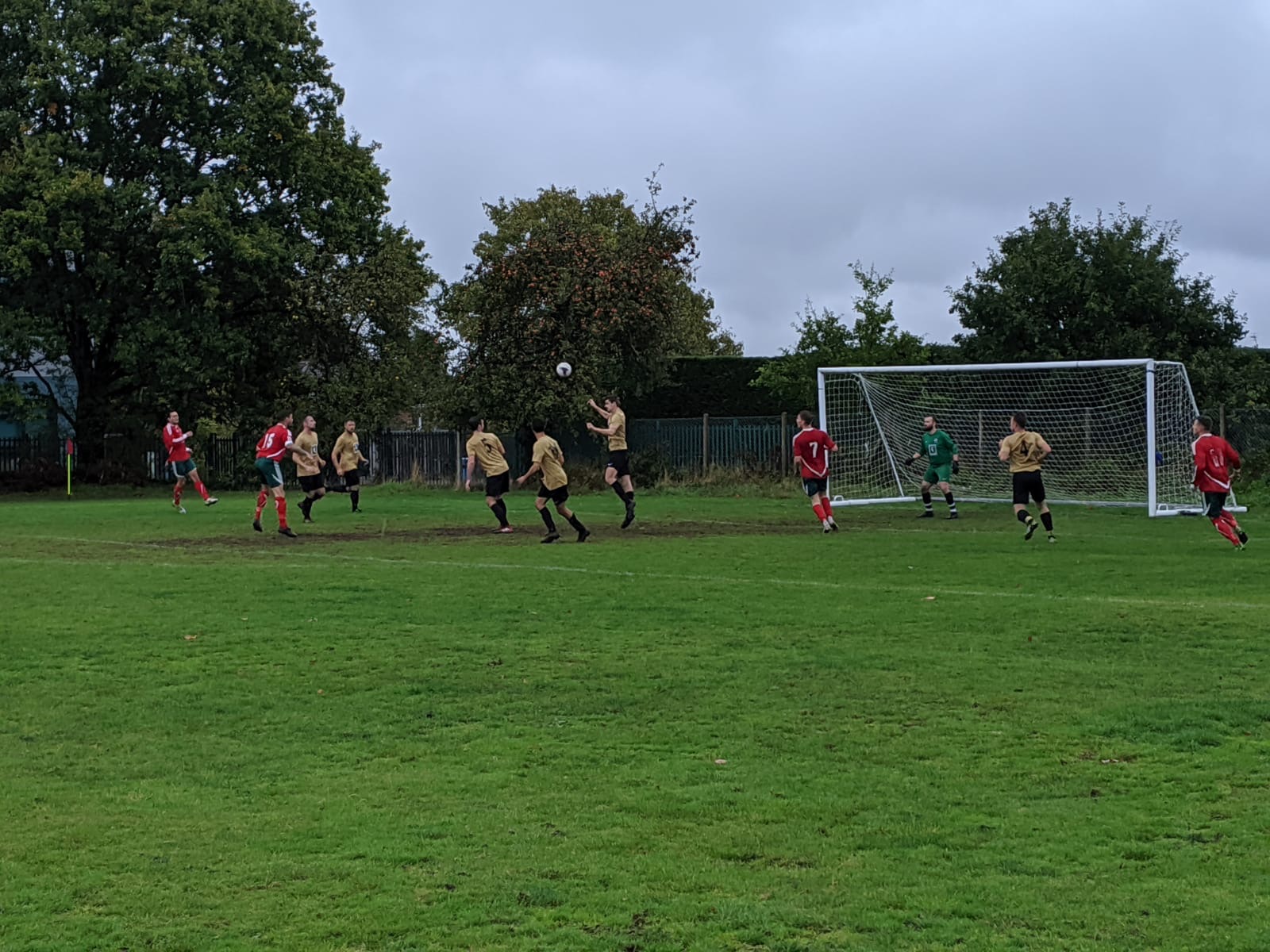 Unfortunately though, KPR do like to make it hard for themselves. After around half an hour of positive football James Mullins collected the ball and in his infinite wisdom threw the ball to the double marked Chinga who had the touch of a…bad player. The advancing forwards ran through and easily punished the mistake.

The second Chiddingfold goal came not long after, this time a switch pass to the number 11 who took it past two defenders and hit the ball home well.

The sulking and bickering that plagued the Golds last year did not return despite the circumstances. KPR picked themselves up and got back on with it. It didn’t take long for the better side to finally make the most of some good build-up play. Seamus received the ball from the middle of the pitch and played a perfectly weighted pass between the centre backs to Liam who tucked the ball away with his first touch.

The first half came to a close and it’s fair to say there was a lot more to come from this one.

KPR’s second goal occured before the dozens of fans had made it back from the bar. Chiddingfold started the game back up and the Golds pushed quickly and forced a mistake straight away. The ball ended up falling to Jonny who hit the ball low but was saved by the keeper, Seamus followed up and finished it off. 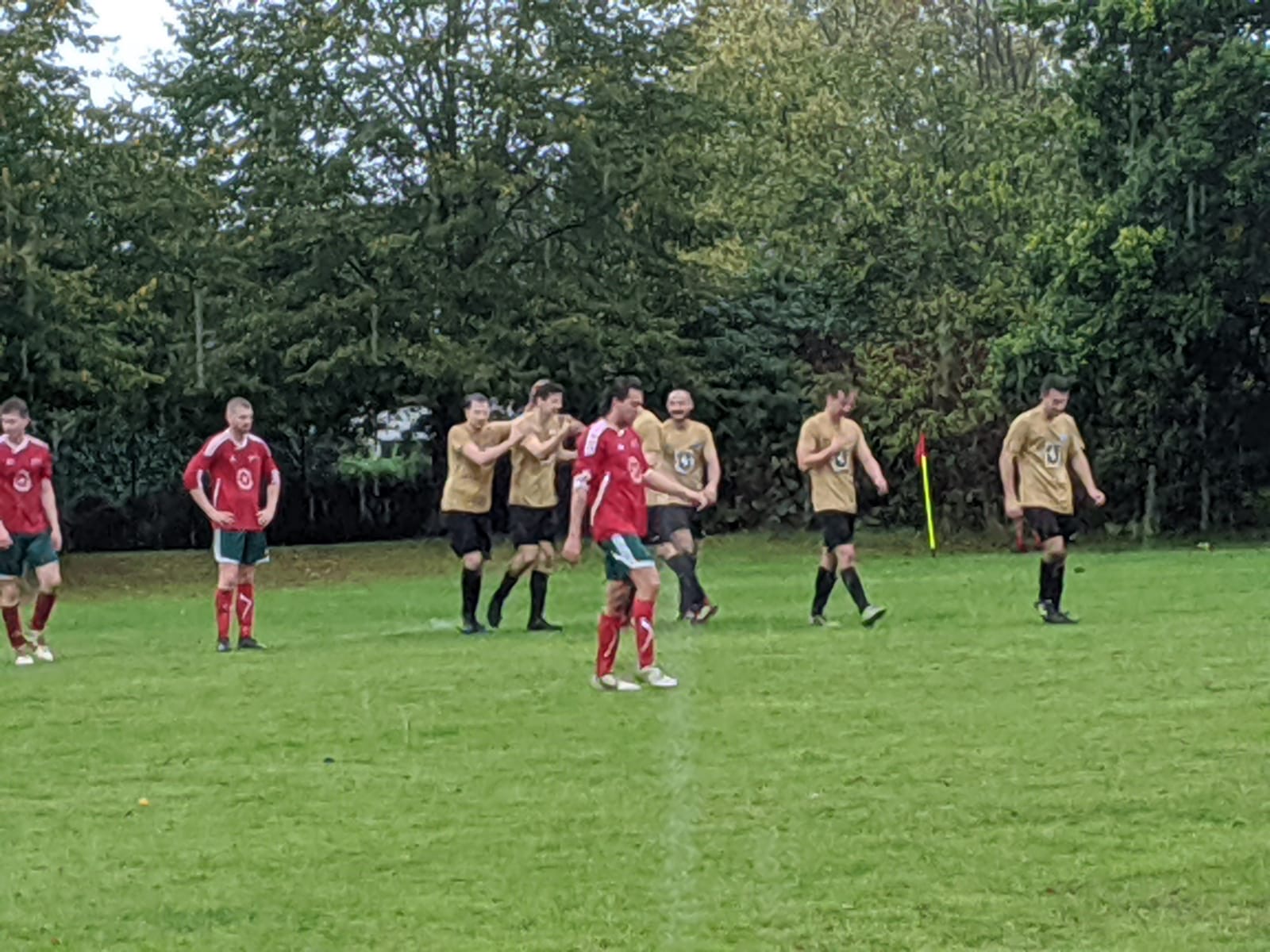 It wasn’t long after this that KPR should have taken the lead. Chiddingfold were simply unable to handle the pressing and quick movement of the advancing gold shirts. A lofted ball through to Jonny who out paced the full back and left the defender no other option than to take him out. Up stepped the ever reliable Owen, he never misses from the spot, apparently. A good save from the keeper and it looked like the opposition could use this to get their tails up.

This was not to be though as eventually KPR did take the lead. Some excellent work from TC on the left feeding the ball to Jonny who beat his man and whipped a ball in to Woodsy who creatively used his curved nose to direct the ball into the bottom corner.

Chiddingfold did start to get back into the game, putting some pressure on the KPR defence. It is safe to say that Chris and Owen dealt with the majoritively aerial threat quite easily.

Finally KPR put the game to bed. The high press again causing issues for the opposition. A short free kick from the keeper to the centre-back, who panicked due to the advancing Jonny and threw the hot potato across goal to the right-back of whom was kind enough to fire the ball against Liams instep and ball rolled over the line. The celebrations energetic as the Golds now knew the game was theirs.

The fifth KPR goal was a counter attack, the ball found its way to Seamus on the edge of the home teams box and after carrying the ball at least 10 yards put the ball through to the “twiglet legged” Danny Way. After beating his man about three times Danny attempted to smash the ball home but could only muster a fluffed strike that looped over the flailing keeper.

The Golds were at it again only a few minutes later. Another counter attack, this time with Liam and Woodsy linking up and doing their best to waste the opportunity. After plenty of faffing around the ball finally fell to Woodsy who closed his eyes and swung a left peg at it, the ball arrowing into the top corner of the net.

The KPR forwards certainly looked like they had had enough of punishing the opposition, however, man of the match Owen Stutchberry was not finished yet. Perhaps worried that James Mullins would only get one mention in this week’s report Owen threw himself at the opposition striker inside the area. No complaints from anyone here, clear penalty. The spot-kick was scored and KPR had to decide whether they wanted another one.

They did, this time from an unlikely source. The Golds with a corner kick that ended up at the back post with Woodsy who connected well with ball forcing a save from the keeper who could only push the ball out to the thankful Chris Butler, a first goal for the club.

The final whistle brought a final exhale of breath from the KPR faithful who no doubt expected it still to go wrong despite the 4 goal cushion.

It was about time the Golds put some chances away and got the elusive three points. The beer tasted much sweeter after this one.