There is something about away fixtures against Hambledon that spells doom for Keens Park Rangers keepers and this hard fought draw almost recreated the chaos of last year.

Unlike last year the ressies began the game, despite numerous absentees from last weeks winning team, with a complete squad that many other reserve sides might envy. Ryan Wallis, enjoying a rare Saturday off Twitter duties, played up front with the returning Luke Simmonds and they enjoyed a great deal of possession. The first chance fell to midfield lynchpin George Searle however. 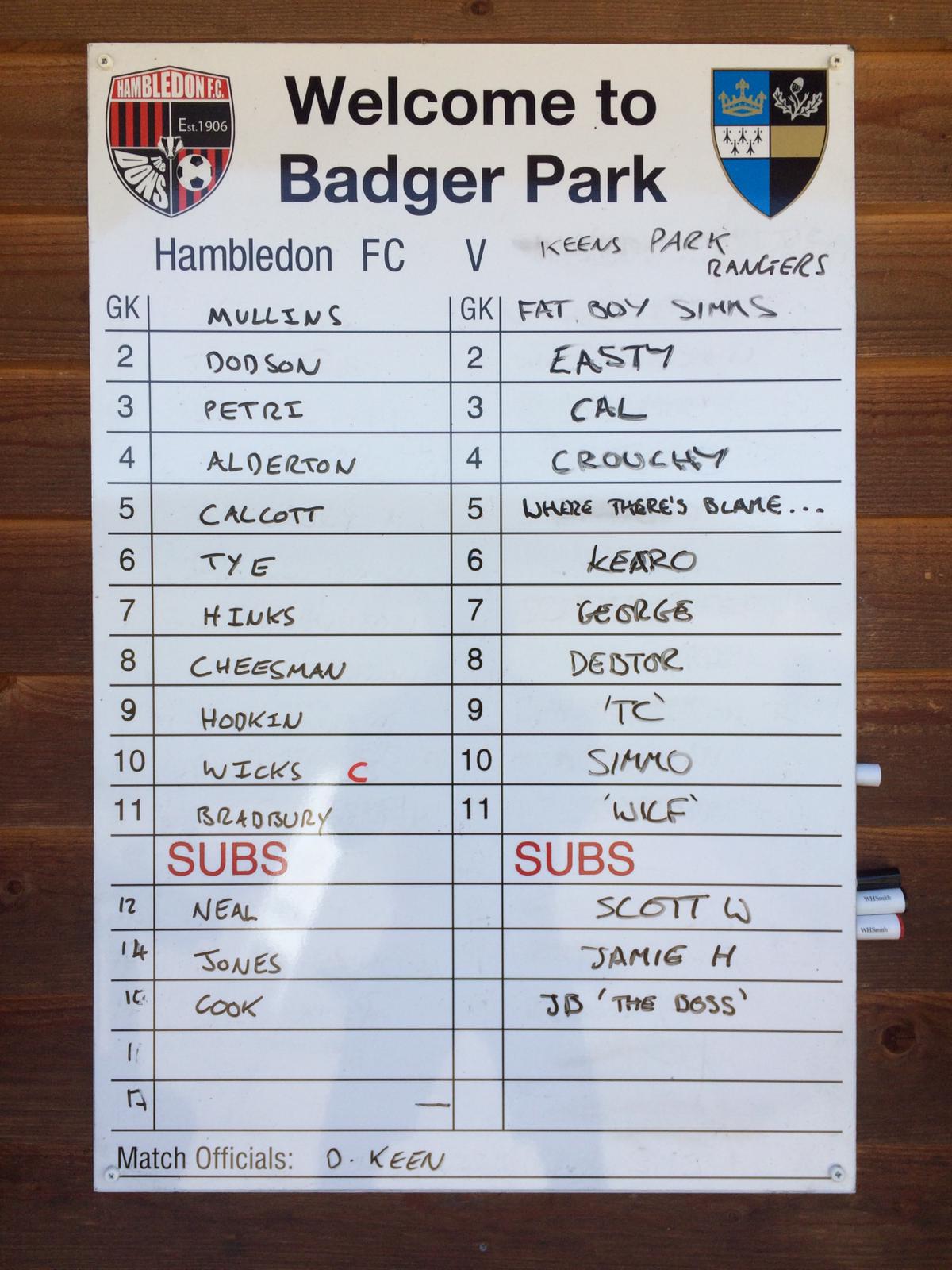 Searle may have squandered his chance but, moments later, a good first time pass from midfield set Wallis free to run in on goal with only the keeper to beat. Although the keeper forced Wallis to take the ball too wide to shoot, he was able to take advantage of Simmos presence in the six-yard box to then finish easily at the near post.

The ressies really should have extended their lead as there were plenty more chances created but the front two either hit the ball straight at the keeper or induced a good save. Bitter experience among the ressies ‘cheer squad’ (seemingly sponsored by Peroni) meant these missed chances were bound to prove costly and, sure enough, Hambledon scored against the run of play. Ressies keeper Jake Simms had little to do up to that point but his game was to be cut short by injury having tweaked his hamstring. 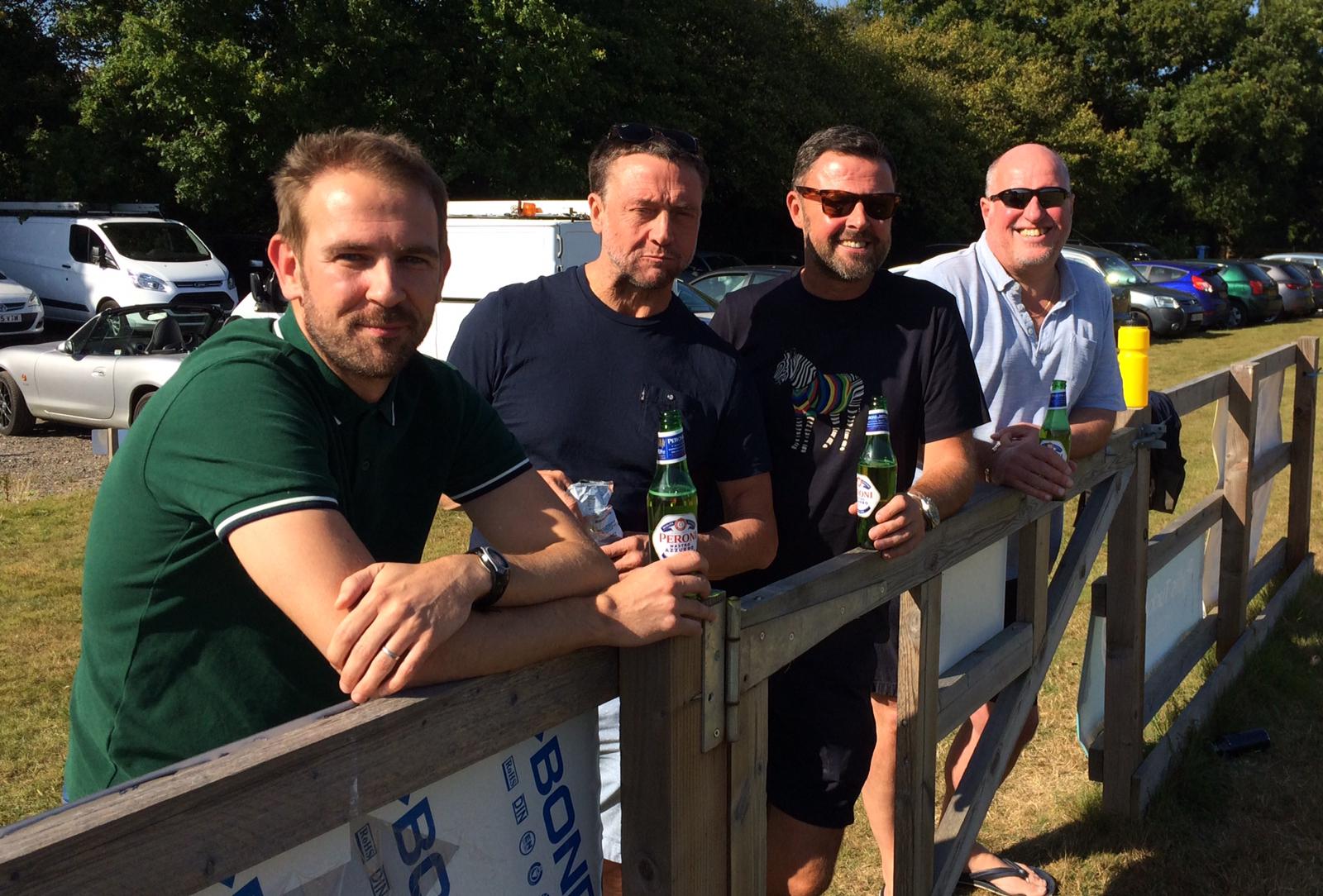 It then fell to sub Scott Whittaker to fill the boy Simms rather large boots shirt. For some reason Whittaker had come dressed as a Ford Fiesta when the

infamous Brexit bus might have been more appropriate. No slouch between the sticks Whittaker was called into action almost as soon as he’d Velcroed his gloves and he came out bravely to thwart the opposition’s forward. Sadly the ball then squirmed loose and fell to the feet of a Hambledon player on the penalty spot who had an easy finish.

Having dominated much of the game going in a half time 2-1 down was disheartening to say the least but guest manager James O’Shea gave (so I’m told) a very positive team talk. Maybe the hairdryer treatment wasn’t needed given the unseasonal heat? Initially, it looked like Osh had adopted the wrong approach as Hambledon cashed in on what proved to be a deceptively strong breeze after a ‘shot’ from the left wing left the luckless Whittaker (who also had the sun to deal with) stranded.

Hambledon had certainly warmed to the task but so had the ressies who rose to the, now considerable, challenge. Man-of-the-match Tom Collins covered every blade of grass while Adam East and James Crouch were uncompromising in defence. Searle, who began to stand out as the front two’s ‘fitness’ waned, was similarly strong. And yet, it was Whittaker who proved the unlikely catalyst to an equally improbable comeback.

Having picked out Wallis with a well-directed pass, Wallis’ first touch was a tad heavy but it fell to the feet of Simmo who then caused confusion among the opposition’s defence before substitute Jamie Hunt caressed the loose ball deftly into the top corner. Hunt, who was on for James Kear (who had suffered the ignominy of a footballing lesson from his old maths teacher in the first half), had produced the first genuine quality of the match and it proved contagious with the equalizer soon following after Charlie Pocock seized upon an excellent pass from Searle. 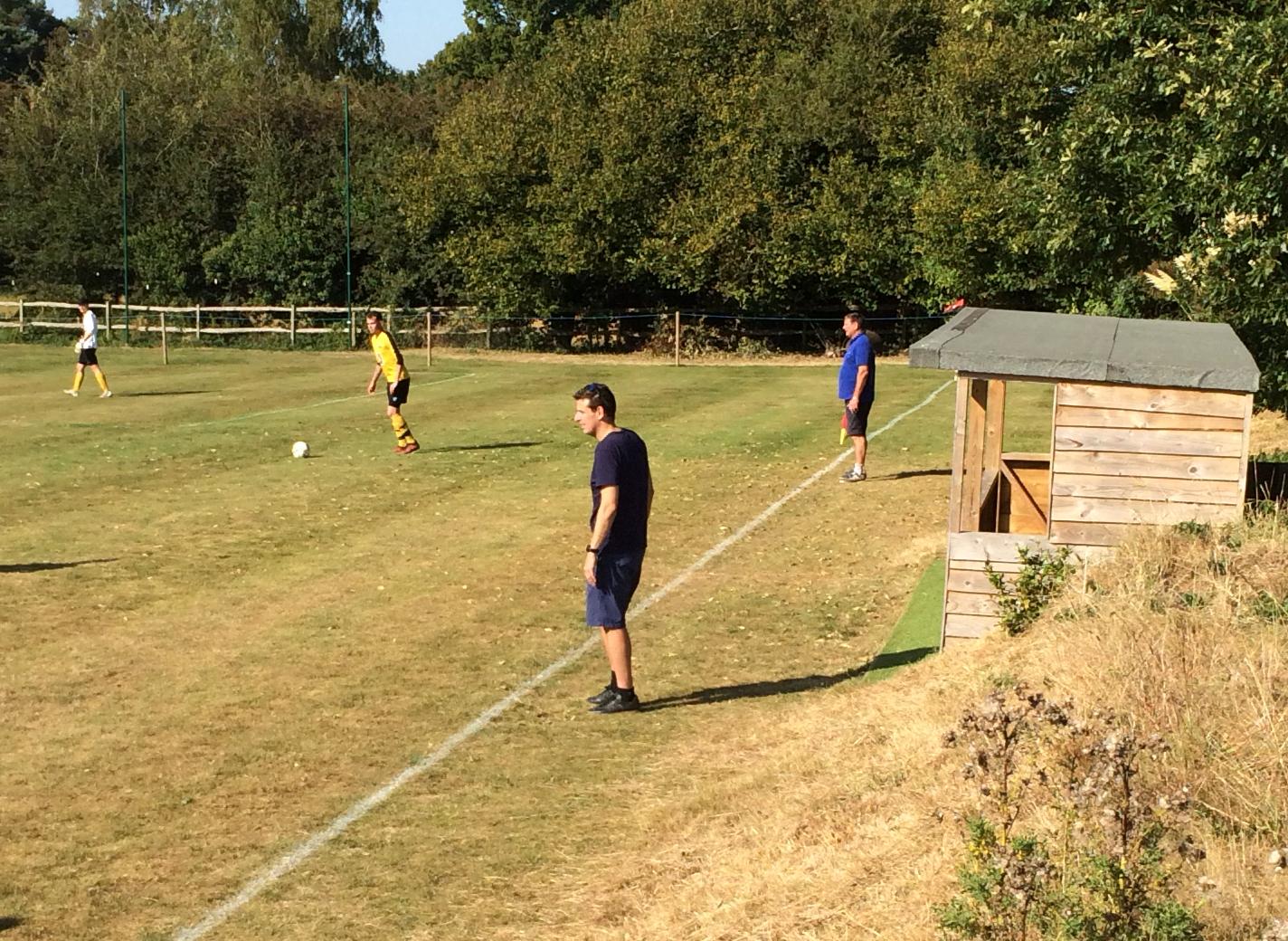 Pocock had been a pest all afternoon and he got goal side of the first defender with a clever nod of the ball before then cutting inside and out before placing the ball into the far corner of the net. The away dugout and supporters roared their

approval. It was definitely ‘game on’ except the referee was to prove an obstacle to any further progress in denying the ressies what looked like two clear penalties for handball.

The first seemed pretty clear-cut and Searle found himself booked for protesting too strongly and Jake ‘whiplash’ Ladd’s protests at the second were equally futile. As the KPR management were fearing the worst the final whistle was received with a strange mixture of disappointment and relief but there was little doubt the ressies had survived what is likely to be one of the sternest tests they will face this season.