“A Storm and some Teacups” – The Ressies Match Report

Filthy weather greeted players and supporters at Fortress Pyrford this week as #StormDennis wreaked havoc nationwide and, like the weather, the ressies did some damage to the opposition in what proved to be a comprehensive victory. 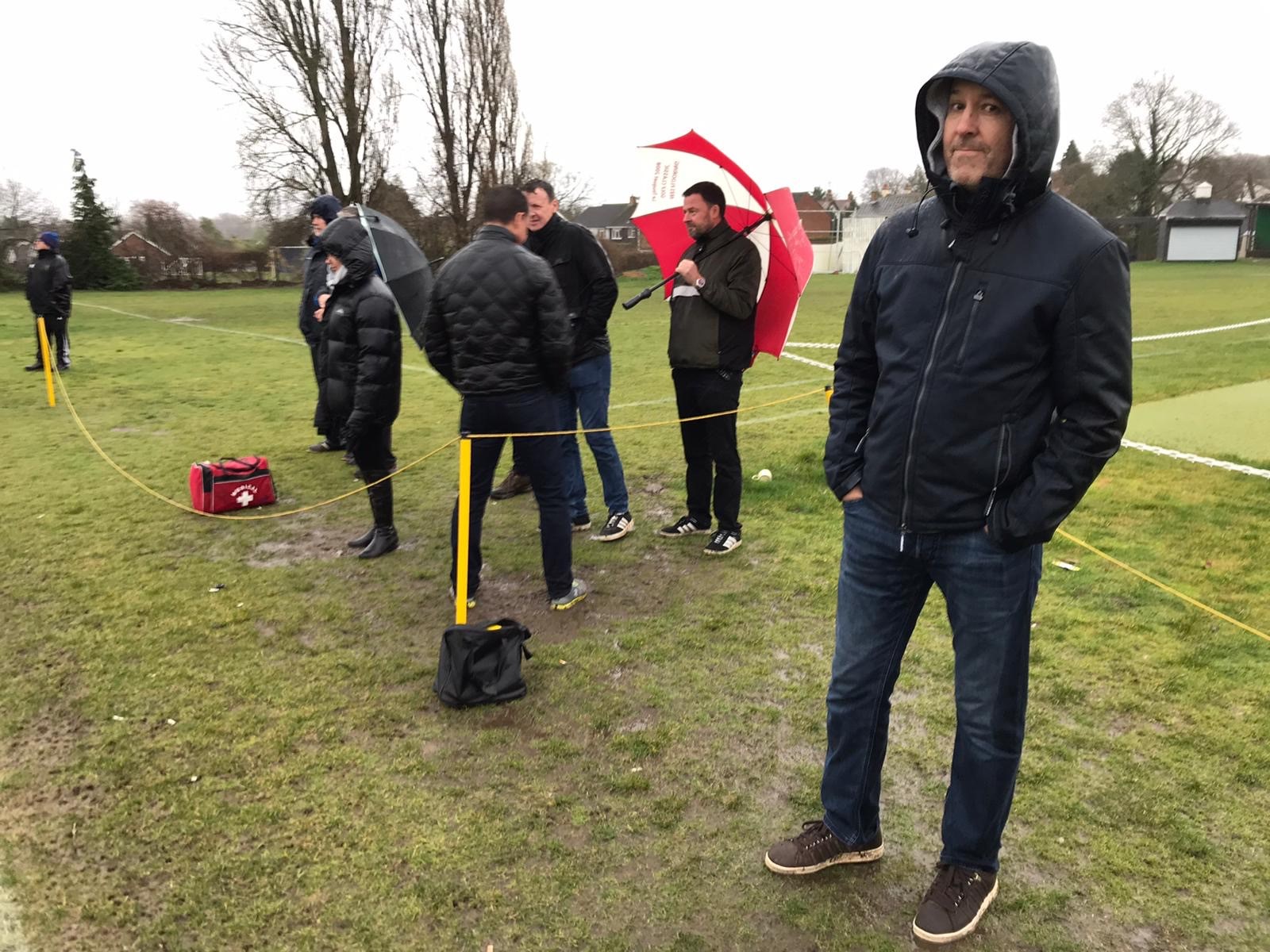 Kicking against the wind in the first half the supporters were expecting a minor Lightwater onslaught, but it was the ressies who dominated and Steven Kemp Jnr should have scored almost immediately after a chip over the top left the opposition defence stranded. Fast as he was to latch onto the opportunity, Kempy regrettably conspired to hit the ball straight at the keeper when the whole goal beckoned.

Ryan Wallis then had a half-chance straight after but the strength of the wind was ably demonstrated after Adam East’s volley remained within the Pyrford post code when it ought to have disappeared up the A3.

Remarkably, keeper Kevin Myers goal kicks seemed impervious to the headwind and the overwhelming majority of the play remained in the Lightwater half. As he has done for the last few weeks, Alex O’Shea was playing well and he created another chance for Wallis but he couldn’t get the ball under control.

The next chance did much to turn the game as a ball behind the defence turned into a foot race between Wallis and the child-like opposition keeper. Both slid in for the ball and although the keeper gathered the ball he was sufficiently injured that he had to leave the field of play. Frankly, it was the last thing anyone wanted as the lengthy delay in removing the stricken keeper extended everyone’s exposure to the wind and rain, which was now coming down sideways.

The supporters were especially frustrated. The ever present Harriet and Easty’s old man Andrew were, like Tigger and bar manager El Boy soaked to the skin and it was only surrogate manager Chainey who was properly dressed for the occasion. 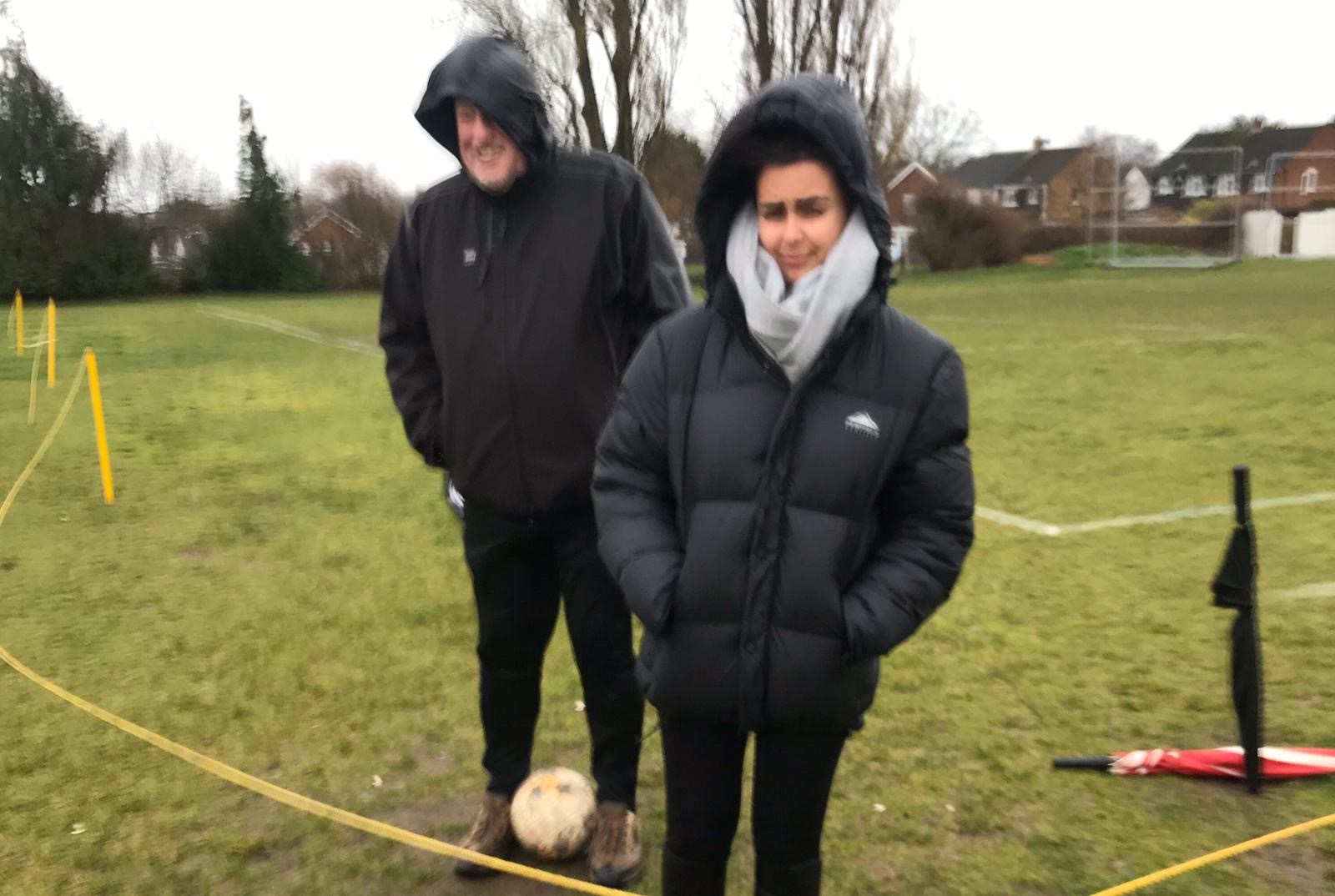 After the undue pressure of last week, there was little hint this week’s occasion was getting to the ressies on the pitch, but there seemed a reluctance to simply ‘pull the trigger’ up top. There was also a frustrating tendency to take on too many players rather than pass, and a combination of these two ‘idiosyncrasies’ resulted in a flawed effort on goal from co-manager Nixon, who hit the replacement keeper rather than the back of the net.

Nil-nil at half time, when against the wind, was a very positive outcome, however, and spirits were high going in at half time. That said, after cuddling radiators and cups of tea, the supporters were less than enthusiastic to go back out for the second half and all but Chainey missed the first goal.

Apparently, it was another assist for keeper Kev, whose goal kick was seized upon by Wallis. According to Wallis himself, it may not have been pretty but they all count and it did much to calm the nerves of co-manager Mungo who was having updates relayed to him in Bournemouth. But no sooner had Tigger’s frozen fingers informed him of the lead, the scores were level following a very well taken goal for the opposition that Kev could only watch curl into the top right-hand corner. 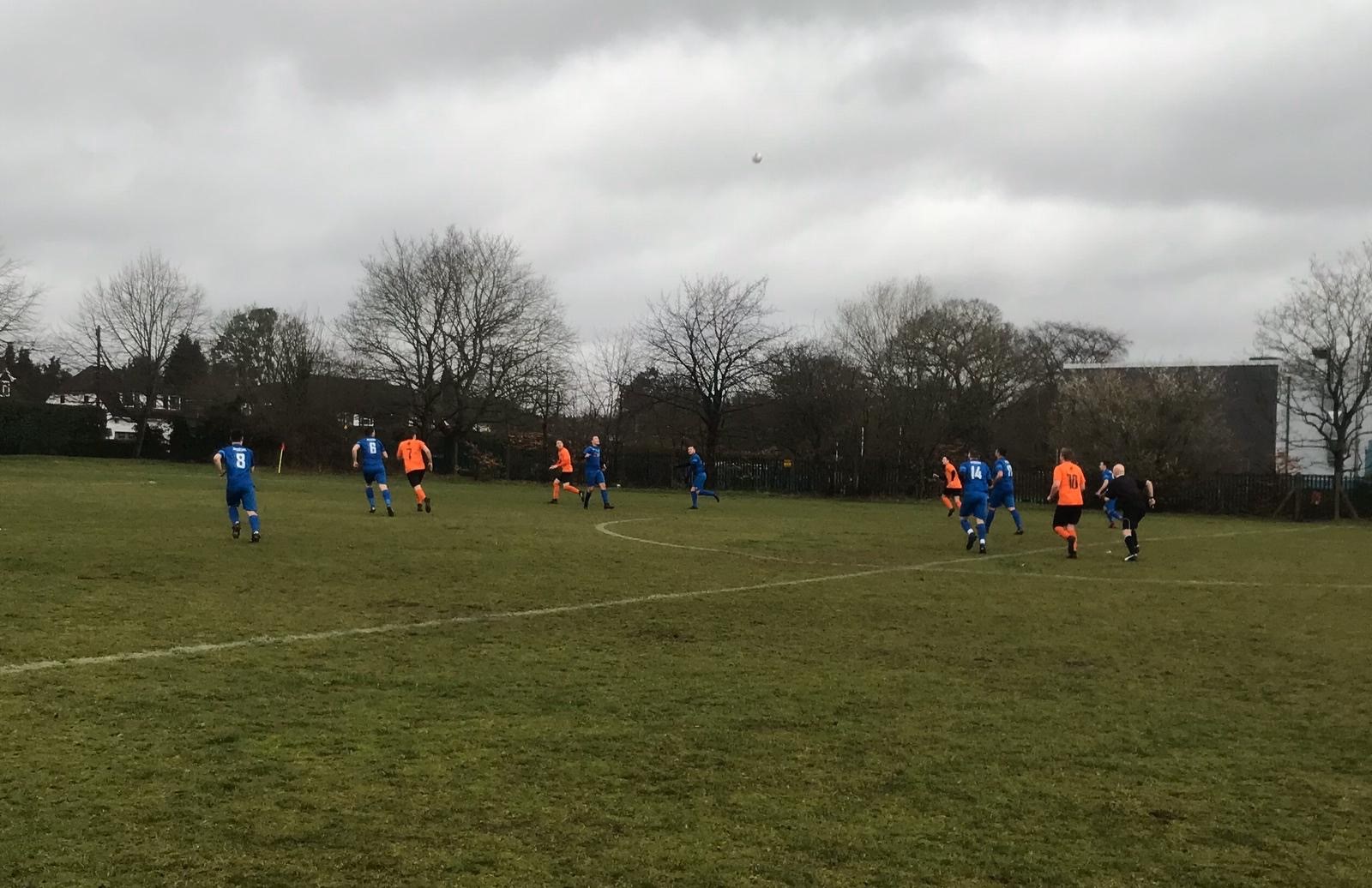 Gone with the wind

Mercifully, “Storm Adam” then arrived and some thunderous challenges from Easty provoked a ‘second wind’ among the players. Naturally, this eventually resulted in some pushing and shoving but Easty’s tackle was certainly no worse than the long-distance sliding tackle that had sent Jamie Hunt flying moments earlier.

After another unwelcome lengthy delay – during which the referee managed to keep his ‘early Christmas cards’ in his pocket – Easty, who now had his dander up, delivered a superb ball that Wallis met on the full at pace, but his stretching effort hit the post. In midfield Alex and man-of-the-match George Searle were increasingly dominant and both had decent efforts from distance. Neither would get the goal their play deserved but Wallis re-instated the lead with his second after the defender failed to clear a cross from the left. 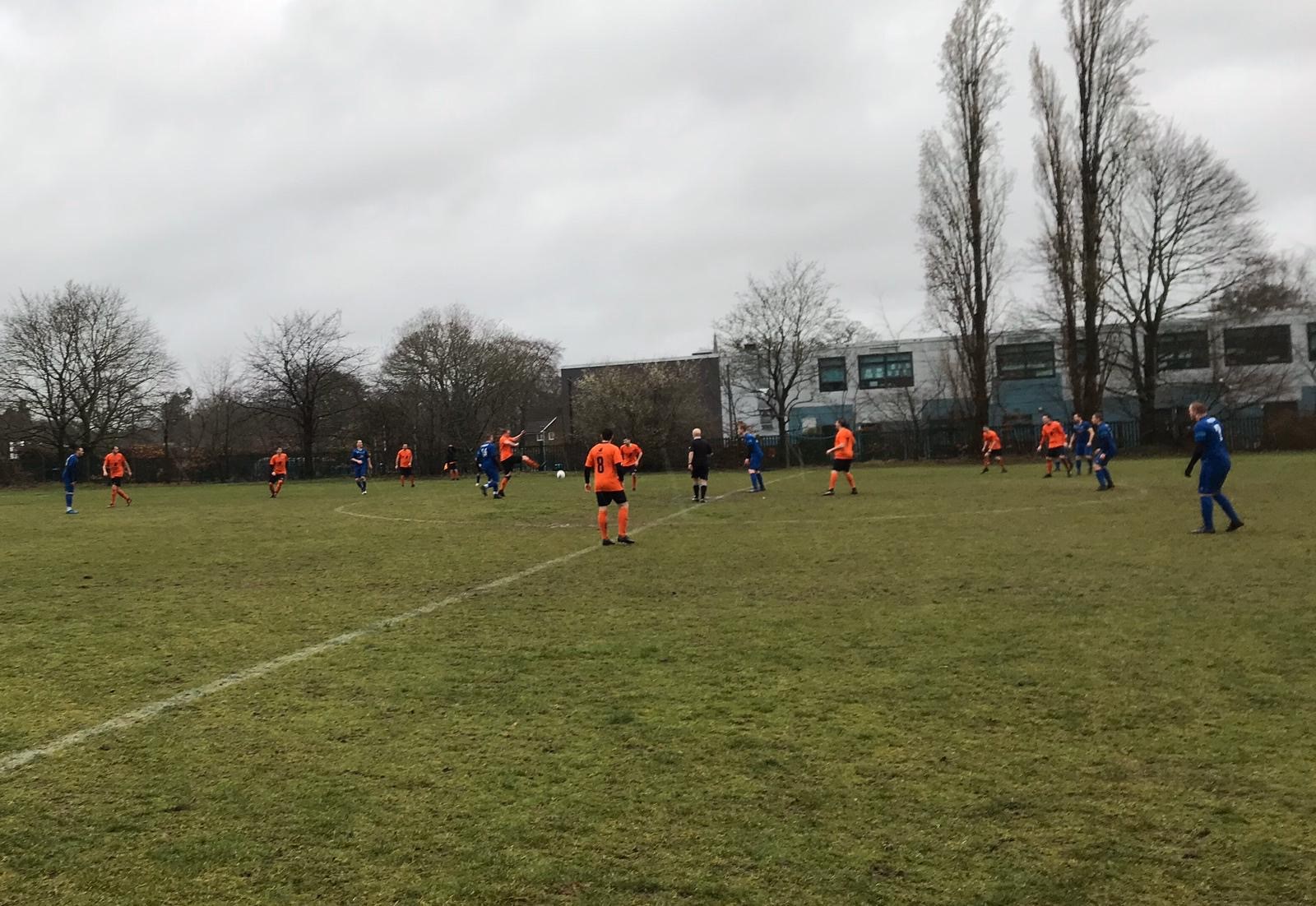 With twenty minutes left Chainey swapped Hunt for returning cult hero Adam Way, who was re-recruited (press ganged?) in Pews courtyard two weeks ago. It did not take Way long to make an impact either and he notched the ressies third with almost his first touch. In Bournemouth, Mungo could finally relax and the fourth came after a great move down the right forced a good save from Nixon’s effort that allowed Kempy to gleefully place the ball into the empty net. 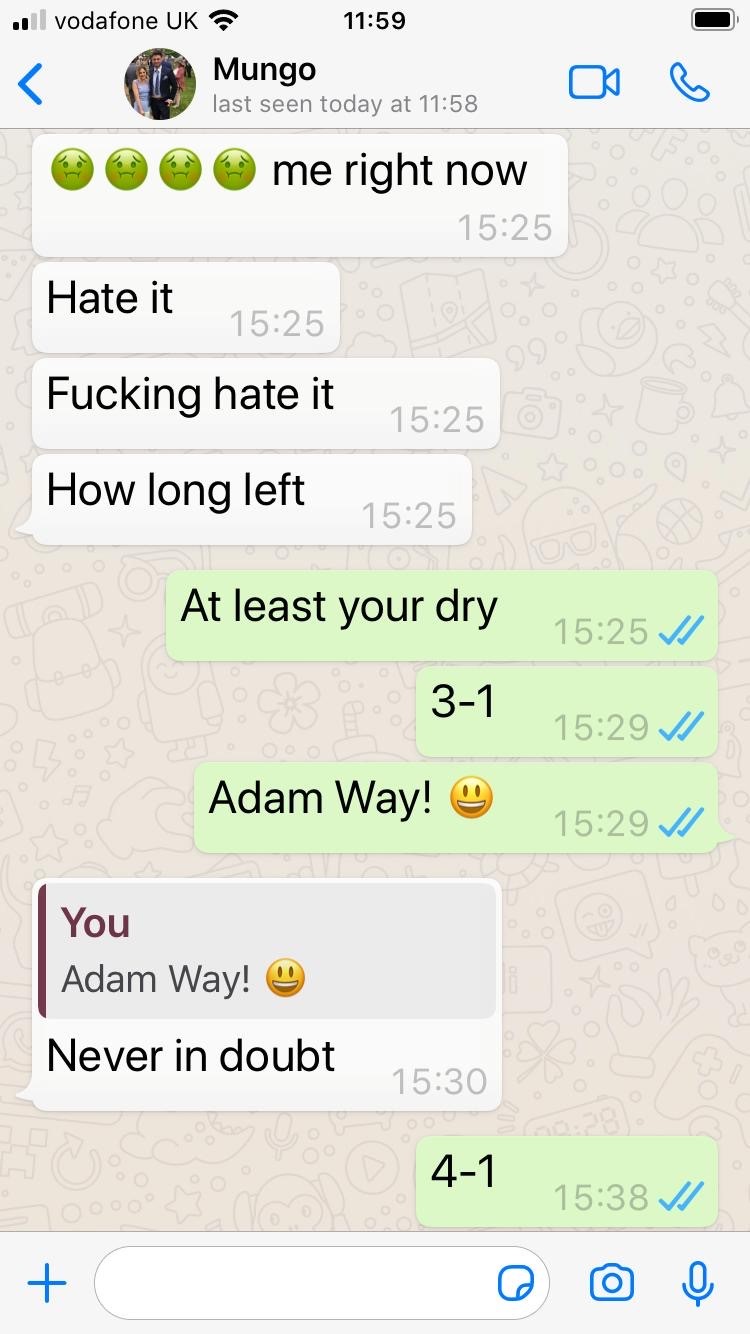 After a number of wayward efforts, Nixon was desperate to score and he finally got a goal after some good play from Wallis teed him up for a simple finish from close range. The game done and dusted the only concern was Easty leaving the field with a sore shoulder injury, but he seemed perfectly fine in the Kings Head later, who provided the perfect grub (pie, chips and peas) for those who had been out in the wind and rain all afternoon. Another, ‘right result’! 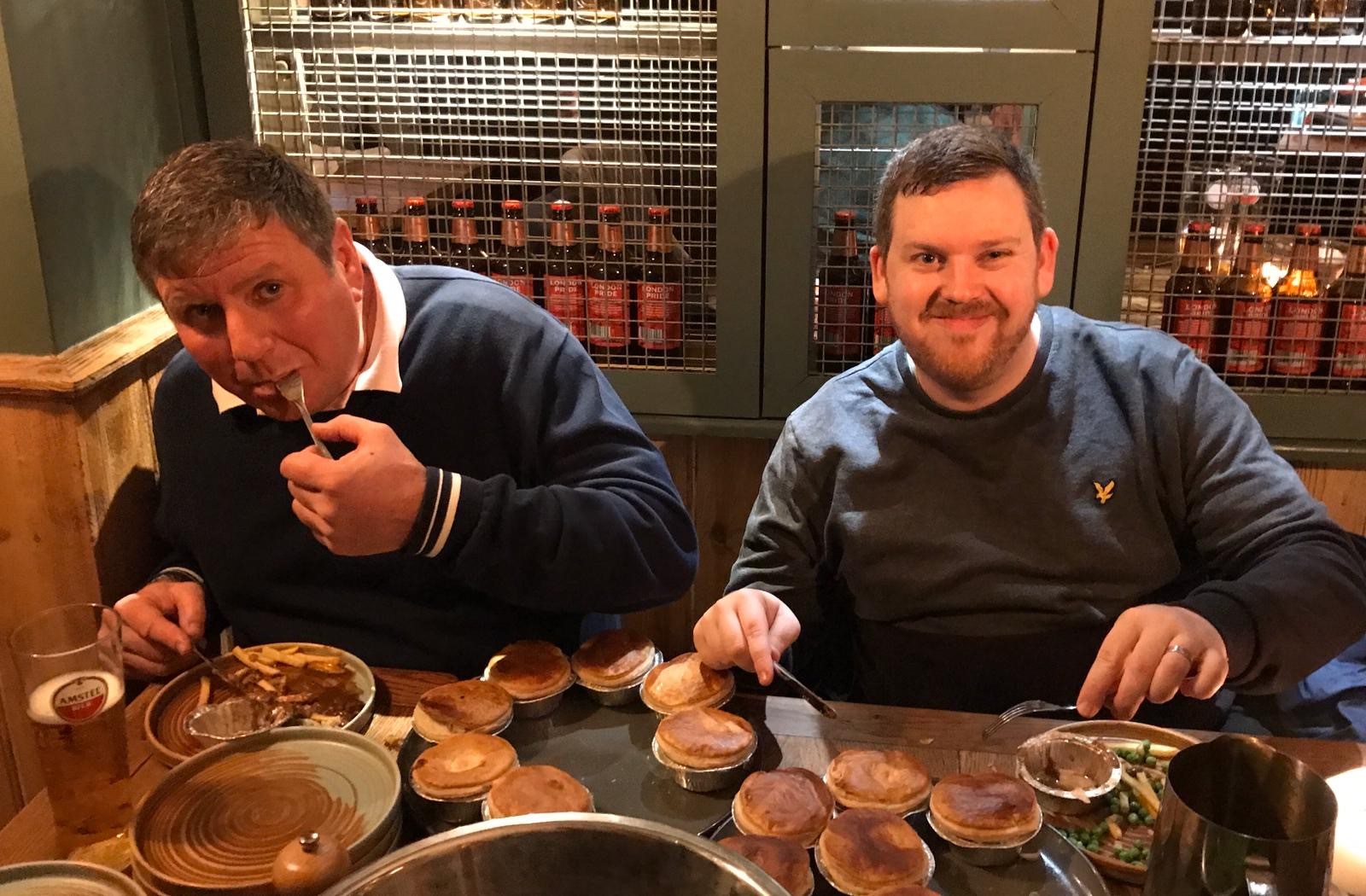